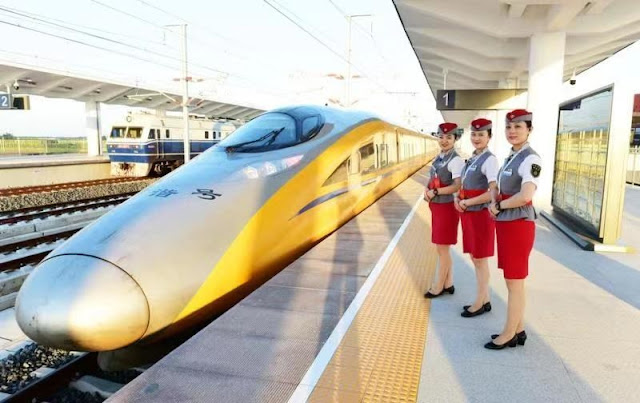 In high-speed rail, e-commerce, mobile payments, and the sharing economy, China is leading the world. The Ji-Qing High-speed Railway and Qing-Lian Railway launched the final joint debugging test on October 27, 2018.

Ji-Qing High-speed Railway connects Jinan and Qingdao, which are two cities in Shandong Province, about 350km apart. Another line, Qing-Lian Railway is from Qingdao to Lianyungang, Jiangsu Province.

According to the official statements, the design speed of Ji-Qing High-speed Railway will reach 350 km/h and will be completed to connect Taiyuan, Shanxi and Qingdao. In China's "Four Vertical and Four Horizontal" high-grade railway network, a national high-speed rail grid that is being overlaid onto China's existing railway network, the new line will be the northernmost of the horizontal lines.

The comprehensive inspection vehicle, which started from Qingdao North Station, arrived at the Jiaozhou Bay Bridge a few minutes after departing. The Jiaozhou Bay Bridge is one of the key nodes, as well as the strategic passage to enter Qingdao on the Ji-Qing High-speed Railway and Qing-Lian Railway.

In order to ensure the joint debugging could be carried out smoothly, the power supply departments in Huangdao implemented real-time monitoring of the relevant line equipment. They ensured the safety of the overhead catenary system and the railway stations.

According to the testing plan, the comprehensive test vehicle detected the Ji-Qing High-speed Railway and Qing-Lian Railway the whole way. The speed increased from 80 km/h to 160 km/h gradually.

To prevent corrosion, the builders used specially designed steel bars. "The steel bars are corrosion-resistant steel bars that contain rare metals, which can be kept free of rust for 200 years," Sun Jian-dang, the 1st sub-sector project manager of the Qing-Lian Railway project Department of the 14th Railway Construction Bureau of China, said.

SOURCE Information Office of the People's Government of Shandong Province