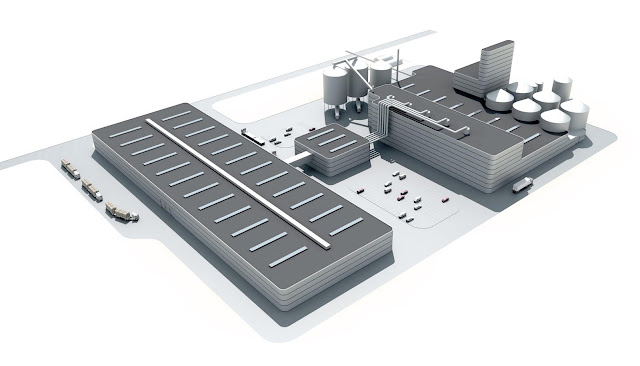 NewEnergyBlue is about six months away from breaking ground on a ground-breaking renewable fuel refinery. New Energy Spirit Biomass Refinery is forecast to turn 280,000 tons of North Dakotawheat straw into 16-million gallons a year of some of the lowest carbon auto fuel selling in California, the world's fifth largest market.

"It's no secret that clean energy producers covet the state's monster fuel market," says Thomas Corle, Blue's CEO. "Carbon is the California regulator's primary yardstick. The policy goal of the state's Low Carbon Fuel Standard is shrinking greenhouse gas (GHG) emissions by reducing fossil carbons in transportation fuels. Traditional grain ethanol is rated 20%-30% below the carbon baseline of gasoline. But with our process design, cellulosic ethanol can achieve 130% below gasoline's baseline. The project gets paid on every ton of fossil carbon saved."


Sited in Spiritwood Energy Park near Jamestown, North Dakota, the refinery is expected to produce not only cellulosic ethanol capable of exceeding California's rigorous air-quality standards, but also clean lignin—without using any fresh water in our designed process.

Because lignin reduces stack emissions in coal-fired power plants, it's a cleaner replacement than wood chips. Lignin is also a lightweight binder for composites that replace metal parts in automobiles and other products.

After its Spiritwood refinery is up and running on Dakota straws, NewEnergyBlue says it expects to double capacity of future biomass refineries and also process corn stalks. Corle envisions a series of refineries throughout the grain belts of the U.S. and Canada, each producing 32 million cellulosic gallons a year and attracting escalating support from capital markets keen on catching the next wave of renewable energy. "California alone could easily absorb production from 70 of our refineries to reach their goal. Other states and Canada are following California's successful low-carbon model."

Stephan Rogers, President of NewEnergyBlue and former head of Qteros, has pursued an economical way to turn plant sugars into ethanol for two decades. "Today we're reaping the benefits of over $250 million already invested in scaling-up and optimizing our proprietary process," he says. "When we extract sugars from grain straws and corn stover, they'll become cellulosic ethanol. But also imagine every plastic water bottle now made from petroleum someday being made from plant sugars that break down harmlessly in landfills."

Though Corle and Rogers speak passionately about their "game-changing" business platform and global energy vision, which has attracted international investor interest, their immediate focus is the New Energy Spirit project. "We've engaged top engineers to complete the development work," says Rogers, "We expect to finalize the $170 millionfinancing and are shooting for steel in the ground by spring 2019."

New Energy Spirit Biomass Refinery, LLC will own and operate the plant. It's funded in part by regional investors with a strong interest in the project's sustainability and its invigorating contributions to the area economy.