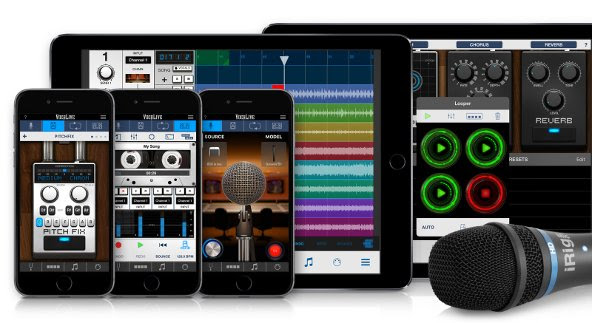 
May 12, 2016 - IK Multimedia, the leader in mobile music making software, apps and accessories, is proud to announce VocaLive 3, a major update to the professional, full-featured vocal effects and production suite for iPhone and iPad. VocaLive 3 gives vocalists the effects and tools they need to create and perform stunning vocals for live settings and for recordings on-the-go, at any time, anywhere.


VocaLive 3 is a complete Vocal effects processing and recording suite that lets vocalists create stunning vocal tracks on their iPhone or iPad. It features 5 vocal effects - Pitch Fix, Choir, Morph, De-esser, and Doubler, plus 7 utility studio effects - Reverb, Delay, Parametric EQ, Compressor, Chorus, Phazer and Envelope Filter. Users can add up to 4 effects in the processor chain and use their iPhone or iPad to perform live or record with its integrated recorder/DAW. VocaLive is designed for use with IK's extensive iRig line of digital and analog microphones, and audio interfaces, including: iRig Mic Studio, iRig Mic HD, iRig PRO and iRig Pro DUO.

New available features in VocaLive 3 include: IK's Mic Room microphone modelling technology*, an integrated 4-track looper*, and the ability to record up to 8 audio tracks simultaneously*, plus one additional effects slot in the iPhone version.


Mic Room - a microphone choice for every voice

VocaLive 3 has a new available "Mic Room" - microphone modelling feature that lets users choose from 20 different studio microphone emulations and add the sound and coloration of some of the recording world's most coveted microphones. Musicians, broadcasters and engineers simply select which input microphone they're using, and then choose the microphone model they want it to sound like in VocaLive 3. Vocal tracks previously recorded in the recorder may also be "re-miked" to achieve a more perfected or specific sound. Mic Room features the definitive collection of vintage and modern dynamic, condenser, ribbon and specialty microphones.

VocaLive 3 also features a new available 4-track looper. The looper is extremely intuitive to use and may be activated and controlled via any iOS compatible MIDI controller, like IK's iRig BlueBoard Bluetooth wireless pedalboard, iRig Pads, or any standard MIDI controller connected via iRig MIDI 2. Users simply activate the first loop channel and perform, then hit stop when finished to set the loop length. Additional vocal loops can be recorded and activated for the ultimate in creative vocal exploration and development of melody, harmony and lyrical concepts. Each "loop" channel features its own volume control for mixing, and loops can be exported for use in the DAW/Recorder or shared.

Now users can enjoy up to 8 channels of simultaneous multi-track recording with the available built-in DAW-like mixer in VocaLive 3. The Recorder/Studio section provides users with an integrated comprehensive multi-track recording studio with all the features found in the most popular desktop setups. Users have access to 8 tracks with Pan, level mute, solo, effects arm and record enable, dual sends per channel into a master effects section, DAW-style editing and waveform display. VocaLive allows musicians to create complete works of art without having to leave the app and disrupt the creative flow.


Reign with the chain

VocaLive 3 provides an array of utility and FX processing tools in the form of virtual stompboxes that can be set up in a chain of up to 4 slots in both the iPhone and iPad versions. Once the effects chain is defined, users can control effects with a MIDI controller like the iRig BlueBoard, and save their virtual setups and configurations as presets for easy recall on the fly.

VocaLive 3 for iPhone and iPad are now available from the App Store for just $19.99. Previous users of the full version of VocaLive may update to version 3 at no cost.

Limited featured, free versions of VocaLive are also available from the App Store.