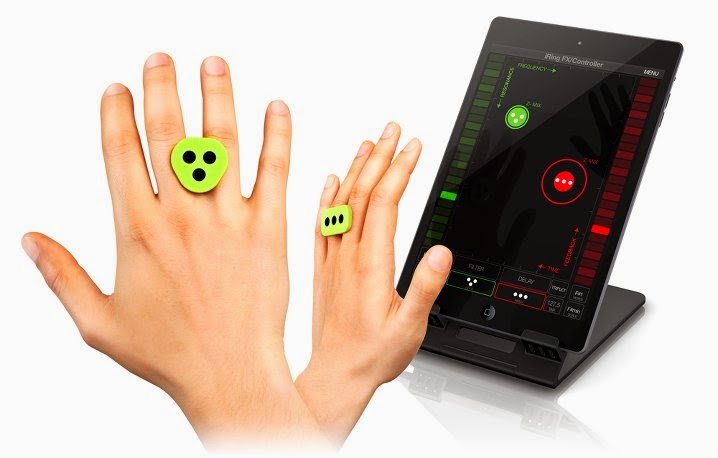 May 8, 2014 - IK Multimedia, the innovator in mobile music-creation apps and accessories for iPad and iPhone, is proud to announce that iRing™, the first motion controller for music apps and more, is now available from music and electronics retailers worldwide.

First presented at CES 2014, iRing is an affordable, wearable technology system that gives users a new level of gestural control over their favourite music apps, in real-time, using hand positioning for unprecedented music expression.The iRing system consists of two double-sided “rings” to wear comfortably on the fingers along with a series of apps that are able to detect the iRings’ accurate positions in space using the device’s camera. Through the recognition of the dot patterns printed on the rings, the device’s camera picks up the movement and translates it into MIDI information. Users can then interact with music apps by simply moving their hands in front of their device through the precise reading of the ring position, which is converted into music commands or MIDI control messages to operate various app parameters without touching the device. 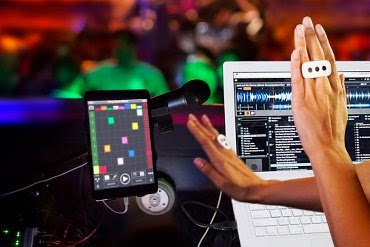 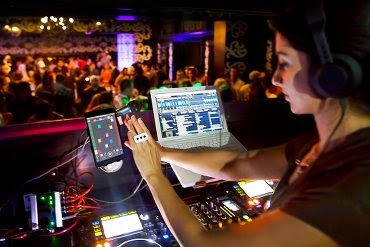 iRing Music Maker is a free app that gives music lovers and DJs a fun new way to create music and grooves using hand gestures, no matter what their skill level. iRing Music Maker utilises music “loops” that always sound good together and can be remixed in virtually limitless combinations by simply waving the hands with the iRing controllers in front of the device’s camera. Users can change beats, control rhythmic elements, play synth parts and control effects providing hours and hours of quality musical entertainment. Plus, iRing Music Maker also includes lead and bass synths with respective pattern players that can be independently operated for hours of error-free musical improvisation. Creating music has never been so much fun!iRing FX/Controller is the app for skilled musicians and DJs that is both a real-time audio effects processor and a MIDI controller with fully assignable parameters. It can be used as a touch-less outboard audio effects processor, or can be fully configured to send multiple simultaneous MIDI parameters; such as control changes, notes or any other MIDI messages.As an effects processor, iRing FX/Controller uses the analogue or digital input of the device for processing external audio sources. FX/Controller can also be used with Audiobus and Inter-App Audio compatible apps to process the audio stream from music apps running on the device to add stunning and brilliant audio effects. The iRings can control up to six effects parameters at a time. iRing FX/Controller operates two simultaneous effects, selectable from up to 16 powerful and creative effects, including: Delay, Stutter, Phazer, Flanger, Compression, Fuzzy, Reverb, AutoWah, Crush, Twist Up & Down, Brake, Spin and Tail. As a MIDI controller, iRing FX/Controller can transmit MIDI messages to other Virtual MIDI compatible apps running on the device or to external devices using compatible MIDI interfaces (like IK’s iRig MIDI). iRing FX/Controller can send out the complete set of MIDI messages (control change, notes, program change, pitch wheel, aftertouch, MIDI system real-time, and MMC, MIDI Machine Control) with up to 3 assignable parameters corresponding to the X, Y and Z axis positions for each of the 2 detectable rings for a new level of touch-less control. Additionally, MIDI messages can also be sent to a computer application via Wi-Fi (using MIDI network). Users can configure the app to control effects, filters, notes, patches and more for creative and dynamic “never before seen” performances.iRing computer vision technology is also directly incorporated into the entire line of IK Multimedia DJ apps like Groovemaker® andDJ Rig™ and will soon be included into other popular IK apps such as AmpliTube®, SampleTank®, VocaLive™ and more so that DJs, guitarists, vocalists, bass players, producers, keyboardists and engineers will have a new level of control to deliver powerful and unique performances.For third-party developers who want to incorporate and implement iRing technology directly into their apps, IK is offering a free SDK (software development kit) and licensing program which makes it easy to take advantage of this new breakthrough technology. iRing can also be easily utilized beyond music for a wide variety of applications including gaming, health & fitness, utilities and more. Developers can take advantage of the technology and improve the functionality of their apps by contacting IK via the link provided on the iRing product page.iRing features Pricing & AvailabilityiRing controllers cost only $24.99/€19.99 (excluding taxes), are available in three colours (white, green and grey) and are now shipping from music and electronics retailers worldwide and from the IK Multimedia online store.iRing FX/Controller and iRing Music Maker apps are available as free downloads from the App StoreSM.