Thursday, June 28, 2012
Video game inspired merchandise has been available for decades. Books, TV shows, movies and toys have all been made, but what many fans still fondly remember are the sweets of their favourite video game characters.

The Grandaddy of video games, it made perfect sense to release sweets based on a character that runs around a map chomping small white dots. The tin containers were made to look like Pacman's face, and inside were small candy pellets. Still available today with other retro sweets, blue and red ghosts were also produced so that the arcade classic could be recreated in candy form.

One of the most recognisable video game characters, Mario has had his face featured on many different types of candy over the years. One of the most eye-catching sweets still being produced are the Jelly Pop lollipops. Made by Au’some Candy and distributed in the USA and Europe, they feature different characters from the series, such as Luigi and Donkey Kong, and the jelly centre is surrounded by multi-coloured swirling marshmallow goodness.

With so many recognisable droids, aliens and Jedis, a whole range of Star Wars themed Pez dispensers were produced and are still available in sweet and toy shops. Yoda, Chewbacca, Darth Vader and many others have all been transformed into Pez form, and their heads all dispense the moreish Pez pellets.

Another retro gaming classic, these bubblegum packs were introduced shortly after the launch of the handheld console in the 90s. The containers were designed to look like a Game Boy unit and contained one strip of gum and three trading cards featuring artwork from the most popular  games. 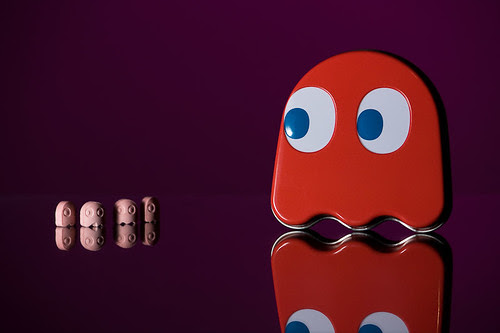 
Pokemon Candy
Much like the creatures featured in the series, Pokemon candy comes in all shapes and sizes. Pokemon inspired Pez dispensers, bubble gum and fruit gummies have all been released over the years, but the most fun and inventive sweets were the Pokeball candy dispensers. Shaped like a Pokeball, these fun sweets contained a small Pokemon toy and were filled to the brim with fruit flavoured candy.

Angry Birds quickly became a world-wide smash hit upon its release in 2009. Still enjoying popularity today, it was inevitable that fans of the series would also embrace these delicious sweets. Angry Birds fruit gummies are shaped like the different birds in the game and each have a different fruity flavour.

Fans of the speedy hedgehog lapped up these Sonic themed cupcakes released by Sega in the early 90s. The delicious cupcakes featured different characters such as Knuckles, Tails and even the dastardly Dr Robotnik.


Although some of these video games are over 20 years old, many of the sweets featured on the list can still be found in many shops and supermarkets or from online retailers.
This article has been created on behalf of Feel Good Games, the free online games experts.