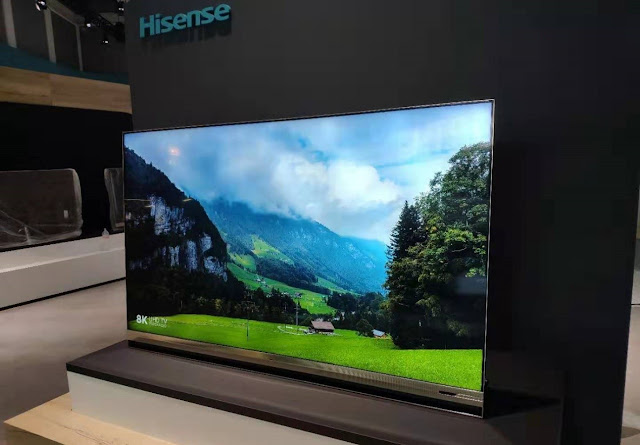 On Sept. 6, Hisense attended the world's largest consumer electronics show in Berlin again. At the attractive booth, Hisense presented its technology-leading TV products. With the leading technology and high-quality products, Hisense is standing out at IFA 2019.

Hisense 8K smart TV attracted many visitors at IFA this year. The 8K TV has two screens. One is the 85-inch screen for display, equipped with an 8K Super Resolution Upscaler. The auxiliary screen at the bottom mainly serves as an interactive function, which can respond to users' voice commands at any time and provide real-time information such as movie details. As the home intelligence center, the interactive function auxiliary screen is powerful and can also control other home appliances and equipment.

Hisense believes that the trend of TV industry development must not be the price war, but the high-end screen. On July 8, Hisense launched the world's first ULED XD TV in China. Compared with the 65-inch screen previously released, Hisense launched the new ULED XD TV whose screen was increased to 75 inches and supports 8K content. Hisense ULED XD TV introduced a second monochrome panel to more precisely control light output. The monochrome LCD layer under the color LCD layer blocks light from pixels that are supposed to be dark before they hit the color layer that produces the full picture. In order to achieve a better display effect, Hisense adopted its unique control algorithm and used 5 chips to achieve efficient control. The static contrast ratio has increased to over 1:100,000.

As a leading brand of laser TVs, Hisense has never stopped exploring laser technology and has completed four technological changes in five years. At IFA 2019, Hisense presented its full range of TriChroma™ Laser TVs, including Hisense 75-inch and 100-inch TriChroma™ Laser TV. All its colors are generated by lasers without any supplement of color wheel, which can easily reach the highest BT.2020 standard in the industry. The color expression exceeds other display solutions and can restore the natural color to the greatest extent. At the same time, the 75-inch TV is the industry's first laser TV which screen down to 75 inches.

What is the future of television? Hisense focuses on the socializing experiences with the integration of TV, AI, IOT and social scenarios. Hisense presented its social TV at IFA 2019, and introduced its interactive features including six-party video chat, AIOT, future life scenarios, AI visual recognition, AR, 3D Avatar and cinema sharing. Meanwhile, as the center of intelligent home system, Hisense social TV can also realize dynamic interactive control with smart air conditioner, smart refrigerator, curtain and so on.

In addition, Hisense, Gorenje and ASKO have launched many new products including air conditioners, refrigerators and washing machines. The brand group of Hisense with unprecedented scale and complete categories will stand out at IFA 2019.