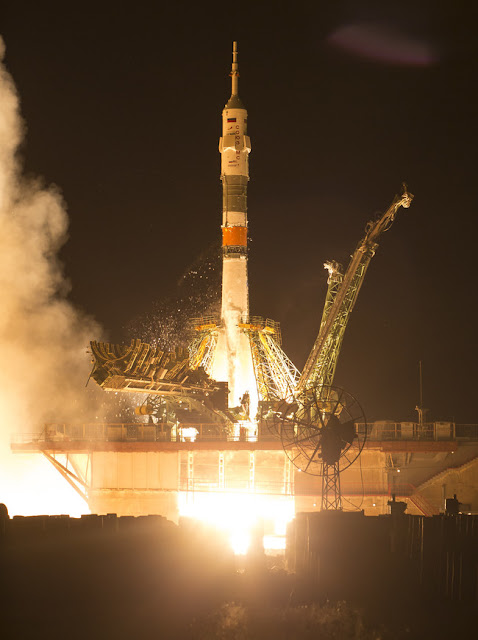 Fifty years to the day that astronauts Neil Armstrong and Buzz Aldrin stepped on the Moon in a giant leap for humanity, NASA astronaut Andrew Morgan and two fellow crew members arrived Saturday for their mission aboard the International Space Station, where humans have lived and worked continuously for more than 18 years.

The Soyuz MS-13 spacecraft carrying Morgan, Luca Parmitano of ESA (European Space Agency) and Alexander Skvortsov of the Russian space agency Roscosmos launched at 12:28 p.m. EDT July 20 (9:28 p.m. Kazakhstan time) from the Baikonur Cosmodrome in Kazakhstan. Their spacecraft docked to the station's Zvezda service module at 6:48 p.m., after a four-orbit, six-hour flight, and they are scheduled to open hatches and be welcomed aboard the orbiting laboratory at approximately 8:50 p.m.

The Expedition 60 crew will spend more than six months conducting about 250 science investigations in fields such as biology, Earth science, human research, physical sciences, and technology development. Work on the unique microgravity laboratory advances scientific knowledge and demonstrates new technologies, making research breakthroughs that will enable long-duration human and robotic exploration of the Moon and Mars.

One of those key technology developments will be the arrival and installation of the second docking port for commercial crew spacecraft – SpaceX's Crew Dragon and Boeing's Starliner. International Docking Adapter-3 (IDA-3) is set to launch to the station on SpaceX Dragon's 18th commercial resupply services mission at 6:24 p.m. Wednesday, July 24. Coverage of the SpaceX launch will air on NASA Television and the agency's website beginning at 6 p.m.

Once the docking port arrives, flight controllers in Houston will use the Canadarm2 robotic arm to extract it from Dragon's cargo hold and position it over Pressurized Mating Adapter-3, on the space-facing side of the station's Harmony module. Hague and Morgan are scheduled to conduct a spacewalk no earlier than mid-August to install the docking port, connect power and data cables, and install a new high-definition camera as part of ongoing upgrades to the station's external camera system.

Highlights of upcoming investigations the crew will facilitate on the orbiting laboratory in the unique microgravity environment include the growth of moss aboard the station, a platform to attempt successful printing of biological tissues and bio-mining in space.

Parmitano and Skvortsov are scheduled to remain aboard the station with Koch until February 2020, leaving Morgan on station for an extended stay. Hague and Ovchinin are set to return to Earth on Oct. 3.

A global endeavor, more than 230 people from 18 countries have visited the International Space Station, which has hosted more than 2,500 research investigations from researchers in 106 countries.

Get breaking news, images and features about working in space on social media at: