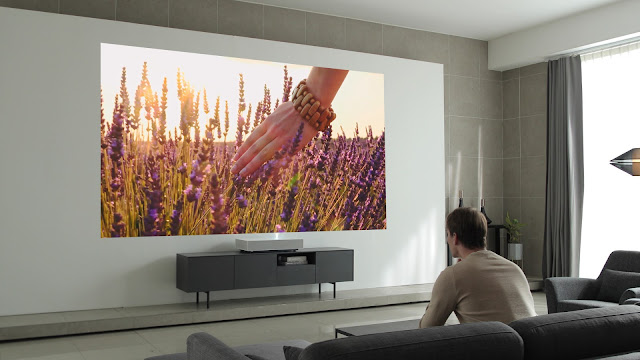 When placed a mere 7.2 inches from the wall, the new projector (model HU85LA) projects up to a 120-inch diagonal 4K image and its 2,700 ANSI lumens deliver a clear and vivid picture, even in higher ambient light conditions. Housed in an extreme minimalist design, the LG CineBeam 4K laser projector includes HDR10 high dynamic range capability to deliver far deeper blacks in dark scenes and more life-like bright highlights, meticulously displaying the content as originally intended by the content creators. It also features IP Control with Control4, Crestron, and Savant.

Building on LG's artificial intelligence innovations, the HU85LA is the first projector to have both the Google Assistant and LG's own ThinQ AI solution built in, allowing for seamless control and content discovery through simple voice commands. No additional device is needed to use the Google Assistant.

When a user searches for content, the projector automatically connects to streaming services such as Netflix, YouTube and Amazon as well as broadcast TV through its smart TV platform. The included LG Magic Remote is also the world's first to be able to implement both motion-based user interface and backlit functions, ensuring the optimized handling of the projector with smart features.