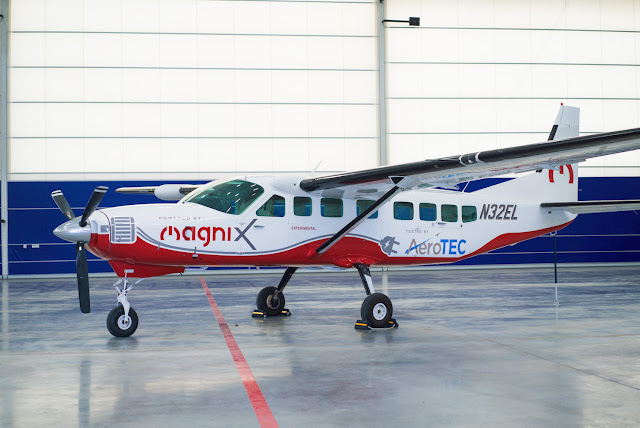 AeroTEC, an independent company focused on aerospace testing, engineering and certification and magniX, the company powering the electric aviation revolution, today announced plans to test the magniX 750 horsepower magni500 all-electric propulsion system on a Cessna Caravan 208B. The two companies are working together to advance magniX's certification process and begin flight testing by the end of 2019.

By reducing operating costs, making air travel more affordable and connecting communities, electric aviation has the ability to immediately disrupt 'Middle Mile' transit — passenger and commercial transportation up to 1,000 miles. Initiatives like the AeroTEC and magniX collaboration are ushering in the future of transportation and bringing the aviation industry — which contributes 12 percent of all U.S. carbon emissions and 4.9 percent globally — closer to eliminating greenhouse gas emissions.

"The electric aviation revolution is very real, and AeroTEC is the right team to help innovative aviation companies like magniX bring their technology to market sooner," said AeroTEC President and Founder, Lee Human. "AeroTEC is responsible for the magni500-powered 208B's modification design, integration and flight test."


The Cessna Caravan is one of the world's most used Middle-Mile planes, with more than 2,600 operating in 100 countries. By retrofitting this aircraft with magniX's propulsion system, the industry will witness its Middle Mile passenger and cargo transportation workhorse go all-electric, ultimately creating new opportunities for the movement of people and goods.

"Retrofitting an iconic workhorse like the Cessna Caravan for the first time is no small feat. Through our work with AeroTEC, we are committed to meeting and exceeding expectations of our solution so we can continue to advance electric aviation," said magniX CEO, Roei Ganzarski. "Electrifying existing aircraft enables flexible, clean air-travel and package-delivery options at a fraction of the cost. And for operators not ready to make the leap into new, clean-sheet, all-electric aircraft, retrofitting the Cessna Caravan provides a solution that allows them to reap the benefits of clean, cost-effective aviation in a shorter time frame."


Integration design and manufacturing of the magniX propulsion system was started in spring and is progressing on schedule. Aircraft modifications are underway at the AeroTEC Flight Test Center in Moses Lake, Washington, with the first flight scheduled before the end of this year.

The magniX motor will be on display at the Paris Airshow at magniX's booth in Hall 2B-DE18. AeroTEC is part of the Washington State Pavilion in Hall 3, Stand #A82.