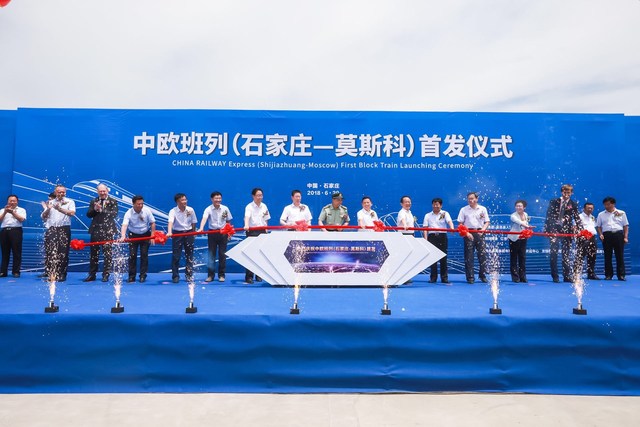 The launch ceremony for the Shijiazhuang-Moscow segment of China Railway Express and the "One Belt, One Road" China Logistics Industry Development Opportunity High-end Forum, hosted by the Gaoyi County Party Committee, the Gaoyi County People's Government and the huanqiu.com, was held at South-Central Hebei Smart Port in Gaoyi County, Shijiazhuang. As the organizer, journalists from the huanqiu.com were on hand to witness the maiden voyage of the first freight train to embark on the route. The huanqiu.com team was joined by more than 500 other observers, including officials from several Hebei government agencies, university professors and researchers, as well as journalists from a wide array of Chinese and international media organizations. Since March 19, 2011 when China Railway Express first commenced operations, the company's express delivery service network has grown to include 43 cities.

Gaoyi County party secretary Peng Jingjie noted that the roll-out of the Shijiazhuang-Moscow leg represents for Shijiazhuang and Gaoyi County the kind of opportunity that is likely to present itself only once every hundred years, and that it is thanks to the locating of the South-Central Hebei Smart Port at the heart of the region as part of the "One Belt, One Road" initiative and the Beijing-Tianjin-Hebei Coordinated Development Program that the opportunity was made into a reality.

Hebei province-based freight forwarder Yibo Holding chairman Liu Ruiling said: "the launch of the train is expected to open up a thoroughfare for the movement of freight between Shijiazhuang and Russia. We are looking forward to building a convenient trade bridge not only for manufacturers in Shijiazhuang but also companies in nearby Beijing and Tianjin as well as throughout Hebei province that are interested in expanding into Russian, Central Asian and even European markets."