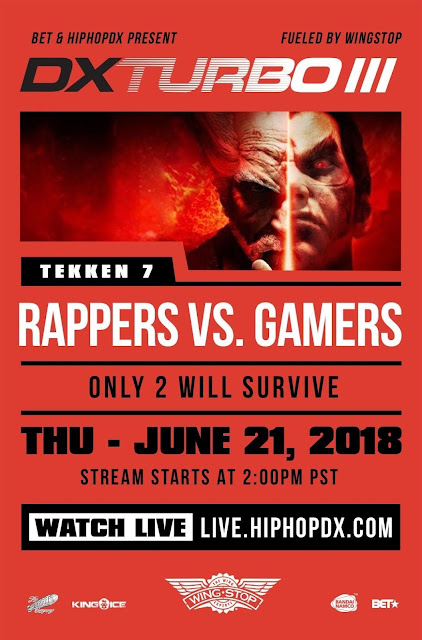 HipHopDX, the #1 Hip Hop news source is bringing back their extremely popular annual video game tournament, DX TURBO. This year's event, DX TURBO III, is sponsored by BET, the nation's leading provider of quality entertainment, music and news television programming for the African-American audience and Wingstop, a worldwide franchise who remains on the cutting edge of digital ordering technology. DX TURBO III, is a highly anticipated event and will once again pit teams of professional gamers and celebrities face off against one another in this year's competition, Tekken 7, a fighting game developed and published by Bandai Namco Entertainment. The game is the ninth installment in the Tekken series, and the first to make use of the Unreal Engine. This exciting double elimination tournament will consist of eight teams of two players, which consist of one Hip Hop artist and one professional gamer.

As in previous years, the whole affair will be broadcast live via HipHopDX's Twitch channel (twitch.tv/hiphopdx), YouTube (youtube.com/hiphopdx) and Facebook (facebook.com/hiphopdx), as well as on BET's Youtube (youtube.com/BETNetorks) & Facebook (facebook.com/bet). The big event will take place in a historic experiential studio in Downtown Los Angeles, on the heels of the six day game culture event, E3. This year the DX TURBO III contest is poised to be yet another great success for HipHopDX, a brand on the move. DX Turbo has mastered this impactful tastemaker event which caters to influencers, gamers, and the urban music community. This is definitely an event that the media will not want to miss. HipHopDX has cut its teeth as an emerging icon in the hip hop music news arena and now DX Turbo III is clear proof that HipHopDX is also making a huge imprint on the gaming entertainment world as well.

"It's spectacular! This event is now in its 3rd year and HipHopDX is very excited to again present such an authentic and original event with the support of BET, Wingstop and Bandai Namco," said Sharath Cherian, Founder/CEO of HipHopDX. "We're honored to have these companies support the gaming and Hip Hop world, as they collide in such a fun way."

2016 saw HipHopDX debut its inaugural DX TURBO, featuring Street Fighter, where an enthusiastic audience of celebrities, gamers, industry tastemakers watched as Rapper Futuristic and Street Fighter Legend Chris Tatarian took the crown. In 2017, Kirko Bangz and iPod King Carter held their audience rapt as they walked away with the top spot dunking it out on NBA Playgrounds.

Boasting a who's who list of champion gamers like high earning tournament player, So-Cal's very own, Tekken 7 master, Mike "Suiken" Khieu, Evolution World Champion Tekken 7 player, Anthony "Jackie Tran" Tran, Tekken Champion Contender and favorite, Vanessa "Swag Master" Tan, and Joseph "Joey Fury" Bennett, whose gameplay style helped propel him to top 5 finishes at almost every tournament he has ever competed in and who recently took out the #1 ranked Kim "JDCR" Hyun Jin in Tekken at Combo Breaker 2018. These gaming gods will be paired up with celebrities such as actor, rapper, Page Kennedy, best known for portraying Radon Randell in the Spike sports comedy series, Blue Mountain State, and U-Turn in the Showtime series, Weeds, Derek Minor, hip hop artist, record producer, entrepreneur, actor, and screenwriter & Sacramento rapper Mozzy, NBA All-Star Baron Davis, and Grammy Award winning producer Drumma Boy, all of whom are anxious to prove they are also up to the challenge, DX TURBO III is sure to be the best tournament yet. (More players to be announced early next week.)

Music will be provided by DJ Hed of Real 92.3. TBS eLeague host by culture icon, Steve "Tasty Steve" Scott and former HipHopDX EIC Justin Hunte will host the live stream. The double-elimination tournament players will battle until one team is left standing. Participants and their guests will be enjoy drinks and delicious fresh wings courtesy of Wingstop while surrounded by celebrities, NBA stars, influencers, singers, rappers and cosplay stars.

Tekken 7 is a fighting game developed by Bandai Namco Studios that had a limited arcade release in Japan in 2015 as the first to make use of the Unreal Engine. An updated version, Tekken 7: Fated Retribution, was released in Japan in 2016 featuring expanded content, including new stages, costumes, items and characters. That version was released for Microsoft Windows, Playstation 4 and Xbox One in 2017. Tekken 7 went on to sell over 3 million copies worldwide by the end of 2017.