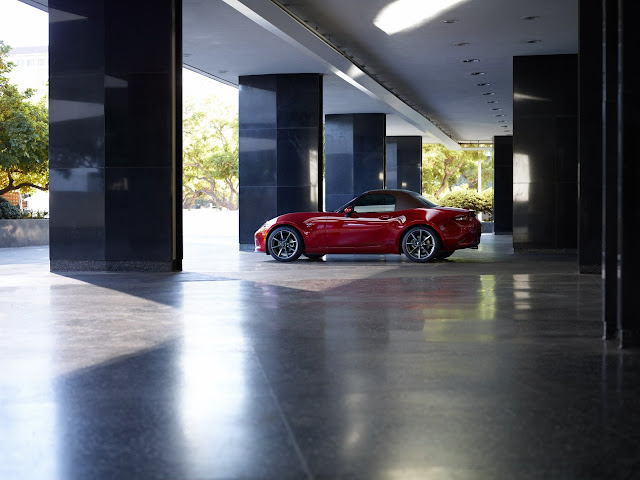 The Mazda MX-5 Miata has never been about power; it's a car whose sole purpose is to help the driver and passenger fall in love with driving. But, a little extra power never hurts, which comes as one aspect of numerous updates for the 2019 model year.

Speaking of rev range, redline has increased from 6,800 rpm to 7,500 rpm. Engineers were able to increase performance through several means, including:


Reducing internal mass and friction: Each piston has been reduced 27g in mass, thanks to a minimized skirt area. Connecting rods are 41g lighter than previous units.
Reducing exhaust loss: The upgraded engine carries an increased valve opening angle and valve lift height. The inner diameter of the exhaust manifold has also been increased. The net results are a 30-percent reduction in pumping losses.
Improved combustion: Reconfigured intake ports and new high-diffusion, higher-pressure fuel injectors improve the tumble and swirl of fuel in the cylinder and better-atomize fuel. The benefit is improved efficiency and torque at all rpm.
Dual-mass flywheel: Replacing the single-mass flywheel with a low-inertia, dual-mass flywheel improves smoothness and responsiveness.
A new exhaust system with richer sound quality.
New final drive ratio: The transmission's final drive ratio has been increased from 3.454 to 3.583 in models equipped with an automatic transmission in order to improve linear response to match the driver's intentions. Gear ratios are otherwise unchanged from previous models.

As a result of numerous changes, MX-5 is quicker, more responsive and aims to be more engaging to drive, adhering to Mazda's unique Jinba Ittai—"horse and rider as one"—engineering philosophy.

On the safety front, the new MX-5 will be sold with a new, standard rearview camera and newly available features such as Traffic Sign Recognition and Smart City Brake Support in addition to other i-ACTIVSENSE safety technologies found throughout various trim levels. In the process of gaining many new features, the 2019 MX-5 gains just 7 lbs. from previous models, owing to a strict adherence to Mazda's "Gram Strategy" and ingenious solutions like adopting an aluminum steering shaft in place of the previous steel unit.

When the fourth-generation MX-5 launched, its development team rallied around the idea of innovating in order to preserve. The latest round of innovations aim to continue that mission.

The 2019 Mazda MX-5 will be available in the U.S. this fall, with pricing, packaging and full specifications to be announced closer to on-sale timing. Details concerning the 2019-spec Global MX-5 Cup racecar will also be announced at a later date.

Mazda North American Operations is headquartered in Irvine, California, and oversees the sales, marketing, parts and customer service support of Mazda vehicles in the United States and Mexico through nearly 700 dealers. Operations in Mexico are managed by Mazda Motor de Mexico in Mexico City. For more information on Mazda vehicles, including photography and B-roll, please visit the online Mazda media center at InsideMazda.MazdaUSA.com/Newsroom.