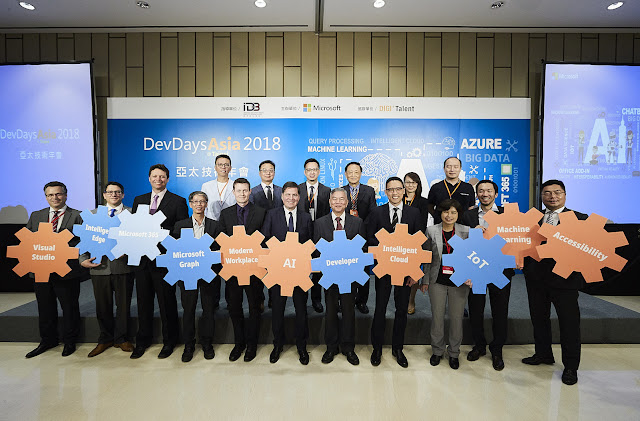 DevDays Asia 2018 is being held from May 28th through 30th by Microsoft and directed by Taiwan's Industrial Development Bureau, Ministry of Economic Affairs. This annual flagship developer event re-enacts the compelling content presented at the U.S.-based Microsoft Build into Taiwan, including "Intelligent Cloud" and "Intelligent Edge". It also offers ample tracks and hands-on sessions to bring to the participants highlights of the innovative technologies, such as Azure IoT Edge and Microsoft 365 offering.

DevDays Asia 2018 has invited 30 experts from Microsoft's headquarters to engage with more than 800 participants via more than 70 sessions of Hands-on Lab and Live Demo. This year, the event focuses on AI, data analysis and Office 365 development and industry solutions in a bid to reinforce innovation momentum for local developers. Microsoft Taiwan also organized an "AI Pilot Program Sharing" session to showcase value-added services and innovative applications using AI.

As AI has become an increasingly popular topic, Microsoft remains optimistic about its future. "Microsoft sees many opportunities in Asia Pacific region in terms of R&D talents, data and adoption of emerging technologies, and we are dedicated in embracing open source and exchanging knowhow around the world. As 'AI for Accessibility' program announced at Microsoft Build 2018, it resonates our mission to enable everyone can be benefited from AI. Today, we are here to turn every developer into an AI developer and to provide them with tools and services so that they can make an impact on every industry and application. Microsoft is also committed to maximizing R&D potential here so as to tap into developing AI technologies for local market and beyond," said Alain Crozier, Corporate Vice President, Chairman and Chief Executive Officer of Microsoft GCR.

"DevDays Asia is a key piece of the puzzle for developers in Taiwan to develop smart agility and enable smarter business models," said Ken Sun, General Manager of Microsoft Taiwan. "Microsoft 365 is a very powerful platform that enables'multisense and multidevice experiences' using the Microsoft Graph and other assets. Developers now can carry out various applications into industry, especially in Taiwan, where intelligent applications are more than a slogan but a real act."


Microsoft's long-term local commitment was strongly applauded by Shen Jong-chin, Minister of Economic Affairs of Taiwan. "Microsoft is going all out to support '5+2 Industrial Innovation Program'. Taiwan authoritative organizations are currently dedicated to accelerating AI innovations in the industry by talent incubation and industrial collaboration. With the continuous supports and efforts put by Microsoft, we believe we will keep promoting and enabling the vision of a smart country," he added.

DevDays Asia 2018 introduces latest technologies in AI, data analysis and smart productivity platforms such as Azure service and Office 365 in order to equip developers with state-of-the-art technologies to speed up the developing process. "With WaaS and other value-added smart capabilities of Windows 10, Microsoft enables software developers to shorten time-to-market and accelerate innovations; moreover, developers can leverage Windows in the modern world, from design to development to deployment to distribution and engagement," said Steve Teixeira, GM for the Partner App Experience team in Microsoft's Windows and Devices Group.

Platform technologies like Microsoft Graph and Office Add-ins can help businesses create new productivity experiences. "Every month, more than 135 million people use Office 365 at work -- many of them, for hours a day.  Creating in Word and PowerPoint.  Analyzing in Excel.  Communicating via Teams and Outlook. By extending your app into these experiences, you can drive engagement beyond the four corners of your application, directly within the tools your users are already in," said Andrew Salamatov, Principal Program Manager Lead of Microsoft.

"Microsoft is devoted to bring open environment to all developers, especially in the surge of edge computing, we continue to enhance computing capabilities at the edge and empower developers to achieve IoT visions in an easier way," said Cathy Yeh, Principal Program Manager of Microsoft IoT Innovation Center.


At DevDays Asia 2018, leading players in six industries -- including Retail, Medical Service, Manufacturing, Transportation, Financial Service, and Media Agent -- were invited to Asia's one and only "AI Pilot Program Sharing" where Microsoft's development tools and technologies were introduced to give key boost to innovations in verticals.

"AI will be the core power to drive economic growth in the future. It improves not only corporate efficiency, but also revenues and earnings. It is Microsoft's continuous work in providing local industrial partners with access to disruptive tools, and in facilitating cross-platform interoperability, open specifications, and open programs. We want to help organizations to solve today's challenges and lead in digital transformation," said Jason Tsao, AI Lead of Microsoft GCR and M&O Lead of Microsoft Taiwan.

Microsoft (Nasdaq "MSFT" @microsoft) enables digital transformation for the era of an intelligent cloud and an intelligent edge. Its mission is to empower every person and every organization on the planet to achieve more.
SOURCE Microsoft Taiwan