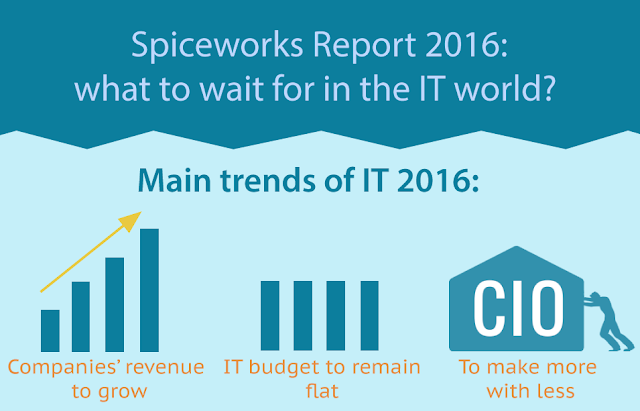 There are 4 main tendencies: even though revenues of the companies are going to increase, IT budget is to remain the same. As a result, CIO's have to solve strategic issues with the same budget they had in 2015. The main reason for IT investments is reported to be end of life of a product. And security concerns are not going to become 2016 priority. The number of IT employees is not going to increase, either.

Another surprising point is that desktops are still the first among hardware expenses with laptops taking only the third place after servers. Hardware expences have the greates share in the 2016 IT budget. Software expenses take the second place.
The main issues to spend IT budget on in 2016 are end of life of a product, growth or additional needs, upgrades or refresh cycles, end user need, project need, budget availability, application compatibility and new features.

Another astonishing results are the answers for the security questions. 61% of the companies interviewed do not conduct security audit. 59% believe that they are not adequately investing into security. Security is not 2016 priority for 51%. And still security expenses are not going to grow (only 9% of software expenses).

To sum up, IT budget is remaining the same. And IT departments are to deal with it.