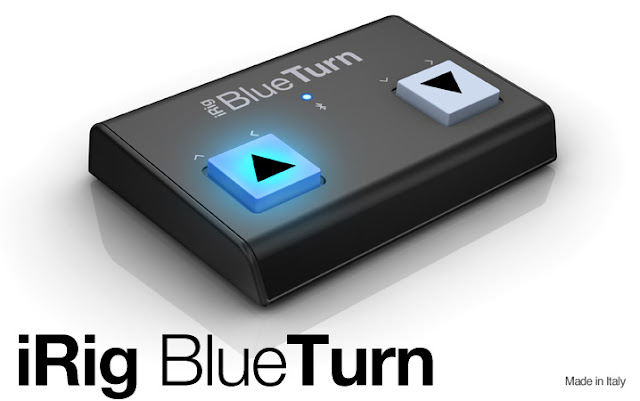 IK Multimedia, the leader in mobile music creation and technology products, is pleased to announce iRig® BlueTurn, the first backlit compact Bluetooth page turning solution for iPhone, iPad, Mac and Android. Portable and streamlined, it's a small foot controller with two highly visible backlit soft-touch buttons that musicians, performers and more can easily pair with their favourite device for use with a wide range of document viewing apps and software like IK's iKlip Stage app.

Designed for use on stage and on the road, iRig BlueTurn runs on two AAA batteries and features a rugged, durable enclosure. It's an ideal companion for musicians who perform from a score, guitar and bass players who practise with tablature, speakers who use notes, presenters who use slides and more. 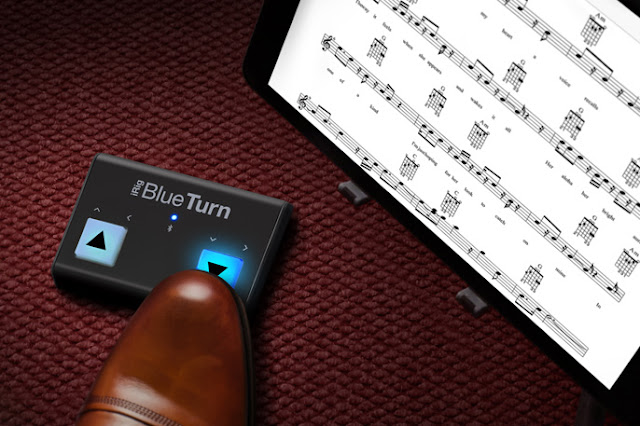 With iRig BlueTurn, it's easy to take control from the floor. Once it's paired to a device or computer, its buttons send standard HID messages over Bluetooth LE technology. iRig BlueTurn works with IK's owniKlip® Stage setlist management app and it's also compatible with many popular page turning and document viewing apps and software.

iRig BlueTurn's buttons can be used in three different modes: They can send Page Up/Page Down, Arrow Up/Arrow Down or Arrow Left/Arrow Right commands depending on whether scrolling or page turning is required. These different modes can be set directly from the hardware when powering up.

iRig BlueTurn is made for performers. Its backlit buttons are incredibly handy considering that most performance situations take place in venues with a low amount of ambient light. These buttons have an unobtrusive glow that makes them well suited for use during digital slideshows, while performing music or giving a lecture.

iRig BlueTurn is ready to go. It sports a small footprint and an enclosure that's tough enough to stand up to the rigours of the road. It easily fits into any small bag or backpack, which makes it a great travel companion for the performer on the go. A mobile design, it's powered by 2 AAA batteries, which last a long time thanks to its ultra-low energy consumption rate.

iRig BlueTurn will be available in February 2016 from music and electronics retailers worldwide, and from the IK online store, for only $/€69.99 (excluding taxes).