56% of People Own at Least One Wearable, as Google Competes for Market Share 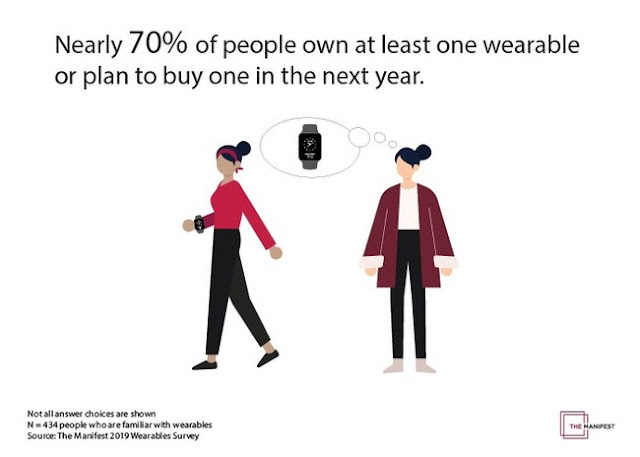 More than half of people (56%) own at least one wearable in the U.S., according to a new survey by The Manifest, a business news and how-to site. Furthermore, 13% of people plan to invest in a wearable in the next year, demonstrating the growing popularity of fitness trackers and smartwatches.

The Manifest analyzed what Google will need to do to compete with Apple.

As Apple's biggest wearable competitor, Fitbit gives Google insight into what customers want in a device so Google can create its own unique smartwatch.

Google invested in creating its own wearable software, Wear OS. The company has not focused on building the necessary hardware, though.

Fitbit, however, has been recognized for its hardware's impressive user experience (UX). This could be a valuable asset to Google.

Google could combine its Wear OS software and Fitbit's clean hardware into one smartwatch, creating a threat to Apple's control of the market.

Still, Google has an uphill battle against Apple as it competes with a brand that already has a winning smartwatch product and the largest cut of the wearable market.


Most People Wear Their Fitness Tracker or Smartwatch All the Time, Indicating Demand for Longer Battery Life

Battery life is a concern for users who wish to keep track of their daily activities without pause. Half of people (50%) wear their fitness tracker or smartwatch all the time and 31% of people wear their device consistently.

A product's long battery life can appeal to users who want uninterrupted usage.

Apple Watch's battery life lasts up to 18 hours, which means within the cycle of a day, the watch must be charged.

Fitbit, however, has extended the battery life of its smart watches, Versa and Ionic, to four to five days.

Google may use Fitbit's longer battery life to create a more seamless experience for customers who want to use their smartwatch uninterrupted.

The Manifest's 2019 Wearables Survey included 581 people who were familiar with wearables and other IoT technology.