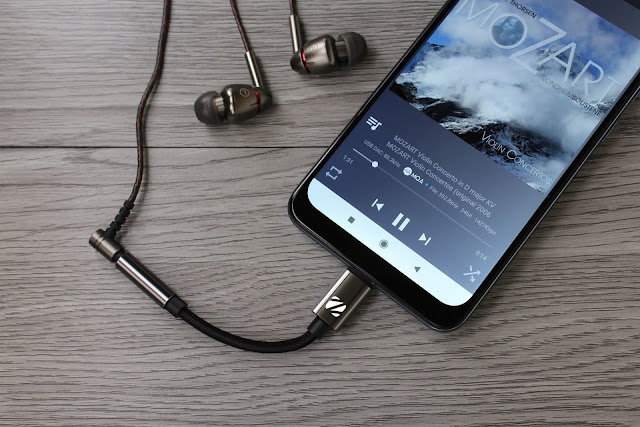 Zorloo is pleased to introduce Ztella, the smallest USB-DAC with high-end audio capability available on the market. The Ztella brings together features like SABRE DACs and MQA rendering in an ultra-portable package smaller than some low-performance USB adapters that have previously been the only option.

HDTV brought premium video quality to the market and raised the expectations of consumers; now, the availability of HD Audio streaming is raising their expectation of audio quality. HD audio is often limited by the hardware on the user side. In the past, consumers would need to invest in bulky, dedicated hardware that was clumsy and quickly drained batteries. Ztella is designed to change the equation and bring HD audio enjoyment to the mainstream. Ztella sounds great and is small, simple, and efficient.

Today, mobile phones, tablets, and computers are powerful enough to handle multiple audio protocols. However, the last and most critical step in the entire audio chain is the digital-to-analog conversion process, i.e. turning musical data 0 and 1 into audible sound waves. Constrained by the limitation of this conversion process, low-quality systems need to resort to re-sampling the signal, or down-converting, in order to fit the pipeline.

Ztella brings sound quality to a new level by bypassing the phone's internal conversion using a digital USB connection. Ztella supports sampling frequencies up to 384kHz with a 32-bit depth and DSD 1-bit encoding up to 5.6Mhz, which eliminates unnecessary sample-rate and bit-depth conversion. By using Ztella, the quality of your sound playback no longer depends on the phone or computer – Ztella handles all of the audio-specific tasks and ensures the best performance from any handset. Ztella, when used with an MQA-enabled app, also makes any phone capable of decoding Master Quality files, something that was previously limited to higher spec smartphones.

MQA is an award-winning British technology that delivers the sound of the original master recording. The master MQA file is fully authenticated and is small enough to stream or download. Ztella is the smallest USB-DAC that includes MQA Renderer technology, which can connect to an MQA Core signal, like the TIDAL or Xiami Music (China) mobile apps for example, and complete the final unfold of an MQA file. When playing MQA files, the LED indicator glows magenta to indicate the Ztella is playing back a fully authenticated MQA file.

Ztella uses the latest generation of SABRE DAC from ESS Technology and delivers a stunning 120dB SNR and 0.0006% THD+N performance. It delivers a balanced, clear and articulated sound in a wide soundstage. The integrated headphone amplifier will automatically detect and analyze the connected headphone to generate the ideal output levels. The Ztella can deliver an output of 2Vrms and more than twice the power of a standard smartphone. In addition, the connected headphone mic and key inputs are fully supported and passed back to the phone or computer, so there is no need to change headsets for a call or gaming.

Ztella was designed in tight cooperation with ESS Technology in order to ensure the best possible performance from their newest products. Robert Wong, VP of Sales and Marketing at ESS Technology, said that "the combined work of ESS and Zorloo has enabled Ztella to be the smallest HD audio solution on the market; this makes it possible to carry amazing sound quality with you anywhere." He continued, "The SABRE DAC technology is highly praised in the Audiophile community and the Ztella USB Audio cable will make the legendary sound quality available to a whole new range of users."

Measuring in at just 11cm and weighing just 5g, Ztella sets a new standard for portable HiFi audio. It is housed in a metallic gray aluminum chassis and does not require a battery. Thanks to its use of USB Audio Class-2 high-speed, it is plug-and-play compatible on Windows, MacOS, Android, and iOS. Its USB-C native connector plus the bundled USB-A adapter allows you to connect to all popular mobile phones and computers.

Zorloo will launch a crowdfunding campaign for Ztella in October 2019. The suggested retail prices are USD $89 for the MQA version and USD $65 for the standard version. There will be an early-bird special offer during the crowdfunding campaign. Please visit the Zorloo website (www.zorloo.com/ztella) for the latest information on the campaign launch and availability.