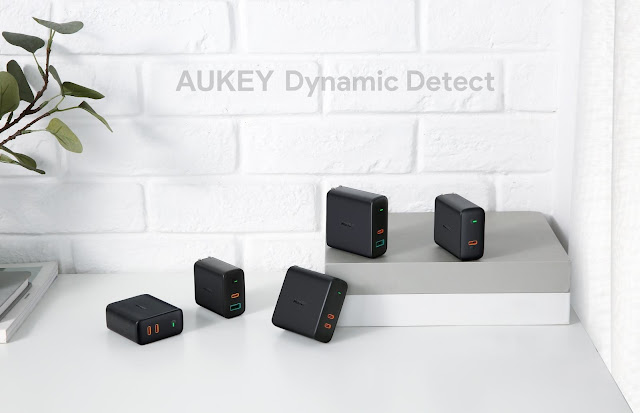 This year AUKEY has introduced a brand new series of Dynamic Detect chargers, providing a powerful and adaptable charging solution for those who need to charge a high-powered device like a laptop, whilst also having the ability to fast charge their phone using the same charger.

The key advantage of Dynamic Detect compared to traditional USB Power Delivery (PD) chargers is that the PD port is able to adjust its output depending on the number of ports in use, rather than simply providing a fixed output. As an example, a traditional 60W PD charger with two PD ports could only output 30W to a single device (with the total power divided between the two ports). With Dynamic Detect, the same charger could output all 60W from a single port when required, and split the power only when both ports are in use.


This means such a charger is capable of charging larger devices like a MacBook Pro, while still being able to fast charge two smartphones at the same time when necessary.

There are currently 5 chargers in this series (PA-D1 to PA-D5) with further variations planned, including a hugely powerful 4-port model with a total output of over 100W. The most recent model to be released, the 63W PA-D5, also incorporates gallium nitride (GaN) technology, allowing for an impressively light weight for such a powerful charger.