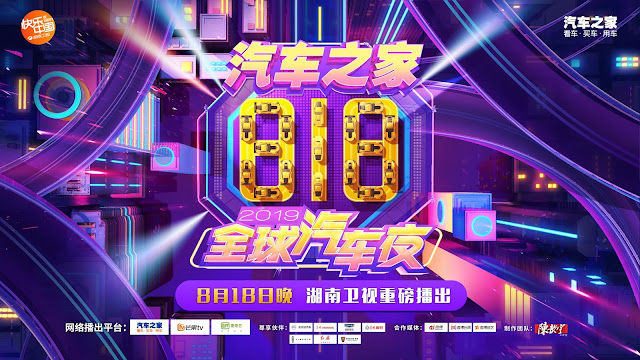 The world's first VR Auto Show will be held by Autohome, a Chinese company listed on NYSE, in August along with Hunan Satellite TV, one of the most popular entertainment TV channels in China. The "2019 Autohome 818 Global Car Night Gala" will be broadcast at 8:00 p.m. on August 18 local time.

The Chen Xinyu Studio, a professional team from Hunan Satellite TV, together with the team which was involved in the New Year's Eve party of Hunan, will undertake the stage design of the event and is strongly supported by the world-renowned team which held the closing ceremony of the 2012 London Olympic Games and the world's largest electronic music festival.

The "2019 Autohome 818 Global Car Night Gala" will invite 15 A-list stars on stage with classic models with over 130 years of history. During the live broadcast, audience both inside and outside the venue can also play a variety of interactive online games, snatch online cash gifts, and get gift packs to purchase cars.

The "818 Global Car Night Gala", which is set on August 18, will not only bring together the top stars, but will be guided by an excellent behind-the-scenes team consisting of top domestic and international talents.

This evening will be directed by Chen Xinyu Studio of Hunan Satellite TV, which has launched multiple variety shows like Dear Inn and My Little series, and produced various New Year's Eve parties. The cooperation between the two has attracted attention from all walks of life.

In addition, the team that will undertake the stage design for the event is also an industry leader. Joined by the creative leading British stage director Kim Gavin, who has organized the closing ceremony of 2012 London Olympic Games and the world's largest electronic music festival, the international lighting designer Tom Sutherland who designed stage lights for superstars like Beyonce and Rihanna, stage designer Heather Shaw, and the famous stage visual design DNT team, the gala will be a feast of entertainment for automobile fans.

Featuring an excellent combination of the entertainment spirit of variety shows with the hard-core connotation of automobiles, Autohome and the Museum of Vintage Cars will display the "130-year history of automobile development" on stage. The first world recognized car, Mercedes-Benz 1, Elvis Presley's rocket-propelled Cadillac and China's first premium car, Hong Qi CA72, will all come on stage to interact with the stars, providing the audience with an extraordinary opportunity to have a glimpse of them. The sense of age gives the real connotation of automobile culture to the gala, which will present a unique large-scale exhibition of classic cars.

The celebrities at the party will be as much to be expected as the cars. Unlike other parties, guests at the "2019 Autohome 818 Global Car Night Gala" will have the chance to drive vintage cars on the spot aside from performing. With a number of game settings and the interaction between celebrities and car enthusiasts, this gala aims to build a bridge between car and TV industries and car enthusiasts and stars. It will also integrate industry and entertainment, and translate ideas into actions, becoming the world's first car and variety show gala.

Autohome's website will enable fans to support their favorite stars and experience the exciting atmosphere of the gala from July 29 to August 11. Participants in the "Fans Support" activity have a chance to win a ticket to the party. Landmark buildings in Beijing, Shenzhen, Shanghai and Changsha will be illuminated from August 11 to August 17 in preparation for the event.

In addition to the 130-year history of automobile development, the gala will offer great benefits for auto enthusiasts. Autohome will join Volvo, Dongfeng Honda, Geely, and Dongfeng Fengxing to release a new car show at the gala and hold a lottery for the exclusive use of new cars for 100 lucky winners. At the same time, Lincoln, FAW HongQi, SAIC Roewe will also present exciting interactive activities.

While watching the show, participants can join in the "shake" activity to share the million yuan cash bonus by entering the Autohome app under the host's instructions. At the same time, the host and the guests will form an orange and blue two teams to compete on the same stage. The audience can bet on the results of the game through app, and the lucky users of the winning party will have the chance to win the big gift, including the right to use hundreds of cars and the luxury gifts.

Autohome said, "818 Global Car Night Gala" offers various ways to play, which will not only enhance the interactions withthe audience, but also attract more attention for the brand, open up new marketing channels for the auto industry, and provide a variety of ideas for the auto e-commerce model. Going forward, Automobile will explore more cooperation with car manufacturers to tap the potential of the auto market and inject new impetus into the industry to boost confidence.

The 818 Gala is the highlight of the world's first online super auto show "818 Global Super Auto Show". Supported by the Automobile Industry Branch of the China Council for the Promotion of International Trade (CCPIT), this auto show strives to create the auto industry's version of "Double Eleven", which not only focuses on the marketing. In addition to the ceremony, the auto show has also formed a matrix communication, in which the station and internet interactions and online-offline activities can be found. These actives like Industry-Consumer Summits, Auto Owners' Day, and Fans' Festival can give a strong boost to partnerships between car makers and dealers. The "818 Global Super Auto Show" has attracted great attention from all parties since its exposure, and is bound to become the most influential event in the automotive circle in 2019, putting auto industry on a firmer footing for gaining its unique IP.