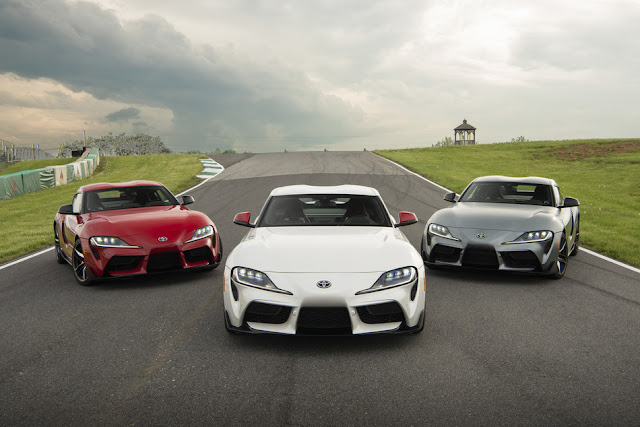 In July 2018, in view of tens of thousands of spectators at England'sworld-renowned Goodwood Festival of Speed, a low, long-hood sports car wearing full-body camouflage with mysterious "A90" markings blasted up the narrow, curvy hillclimb circuit. For Toyota enthusiasts, "A90" was the giveaway: the A40, A60, A70 and A80 that came before were Supras.

In January 2019, the fifth-generation GR Supra, the first global Toyota GAZOO Racing model, made its undisguised world debut at the North American International Auto Show in Detroit, ending years of anticipation and speculation among sports car enthusiasts around the world. Behind the new Supra is a 50+ year lineage of unique Toyota sports and GT cars. Ahead of it awaits the world's great driving roads, some of which were used to develop this all-new expression of Toyota pure sports car performance.

The 2020 Supra goes on sale July 22 and will be available in two grades – 3.0 and 3.0 Premium – as well as an exclusive Launch Edition based on the 3.0 Premium grade. Driving enthusiasts can look forward to an exhilarating blend of power, precision and agility thanks to a rear-wheel-drive design that honors Toyota sports car heritage with its low center of gravity and optimal weight balance. There is a strong connection to Toyota's 1967 2000 GT and 1993-2002 Supra in both design and mechanical configuration. Yet, the 2020 Supra is a fully forward-looking sports car, brimming with a cutting-edge powertrain, chassis and multimedia technology.

The 2020 Supra will feature a 3.0-liter turbocharged inline six that will produce 335 hp and 365 lb-ft of torque. The torque comes on strong from very low engine speeds, thanks to a combination of a twin-scroll turbocharger, direct fuel injection and continuously variable timing on both the intake and exhaust camshafts. Engine response is further enhanced thanks to the inline six's variable intake valve lift system that adjusts intake valve timing and duration.

The 8-speed automatic transmission delivers quick up- and downshifts and features paddle shifters for manual control when desired. Short ratios for the lower gears and a Launch Control function, which is not intended for use on public roads or for repeated short interval use, enable powerful acceleration with maximum traction. Toyota estimates 0-60 mph acceleration in 4.1 seconds, which makes it the quickest Toyota-branded production vehicle to date. Top track speed is electronically limited to 155 mph.

Traction Mode is part of the Vehicle Stability Control System and when selected provides track-driving capability by reducing intervention of the traction and stability control functions. Launch Control is available when the vehicle is in Sport and Traction mode.

The initial 1,500 production Supras for the U.S. will be Launch Edition models. Each will be uniquely numbered and have distinctive features signifying the exclusivity and excitement of Supra's return.

The Absolute Zero White and Nocturnal Black Supra Launch Editions have a red interior. Each of the racing-inspired seats have red leather trim, with red leather-wrapped steering wheel grips, and a red center console with carbon-fiber accents.