Google unveils Adiantum, a new form of encryption for data on lower-end smartphones and other devices with insufficient processing power 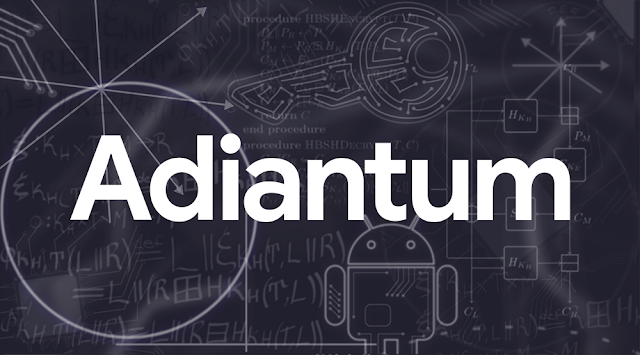 Storage encryption protects your data if your phone falls into someone else's hands. Adiantum is an innovation in cryptography designed to make storage encryption more efficient for devices without cryptographic acceleration, to ensure that all devices can be encrypted.

Today, Android offers storage encryption using the Advanced Encryption Standard (AES). Most new Android devices have hardware support for AES via the ARMv8 Cryptography Extensions. However, Android runs on a wide range of devices. This includes not just the latest flagship and mid-range phones, but also entry-level Android Go phones sold primarily in developing countries, along with smart watches and TVs. In order to offer low cost options, device manufacturers sometimes use low-end processors such as the ARM Cortex-A7, which does not have hardware support for AES. On these devices, AES is so slow that it would result in a poor user experience; apps would take much longer to launch, and the device would generally feel much slower. So while storage encryption has been required for most devices since Android 6.0 in 2015, devices with poor AES performance (50 MiB/s and below) are exempt. We've been working to change this because we believe that encryption is for everyone.

In HTTPS encryption, this is a solved problem. The ChaCha20 stream cipher is much faster than AES when hardware acceleration is unavailable, while also being extremely secure. It is fast because it exclusively relies on operations that all CPUs natively support: additions, rotations, and XORs. For this reason, in 2014 Google selected ChaCha20 along with the Poly1305 authenticator, which is also fast in software, for a new TLS cipher suite to secure HTTPS internet connections. ChaCha20-Poly1305 has been standardized as RFC7539, and it greatly improves HTTPS performance on devices that lack AES instructions.

However, disk and file encryption present a special challenge. Data on storage devices is organized into "sectors" which today are typically 4096 bytes. When the filesystem makes a request to the device to read or write a sector, the encryption layer intercepts that request and converts between plaintext and ciphertext. This means that we must convert between a 4096-byte plaintext and a 4096-byte ciphertext. But to use RFC7539, the ciphertext must be slightly larger than the plaintext; a little space is needed for the cryptographic nonce and message integrity information. There are software techniques for finding places to store this extra information, but they reduce efficiency and can impose significant complexity on filesystem design.

Where AES is used, the conventional solution for disk encryption is to use the XTS or CBC-ESSIV modes of operation, which are length-preserving. Currently Android supports AES-128-CBC-ESSIV for full-disk encryption and AES-256-XTS for file-based encryption. However, when AES performance is insufficient there is no widely accepted alternative that has sufficient performance on lower-end ARM processors.

To solve this problem, we have designed a new encryption mode called Adiantum. Adiantum allows us to use the ChaCha stream cipher in a length-preserving mode, by adapting ideas from AES-based proposals for length-preserving encryption such as HCTR and HCH. On ARM Cortex-A7, Adiantum encryption and decryption on 4096-byte sectors is about 10.6 cycles per byte, around 5x faster than AES-256-XTS.