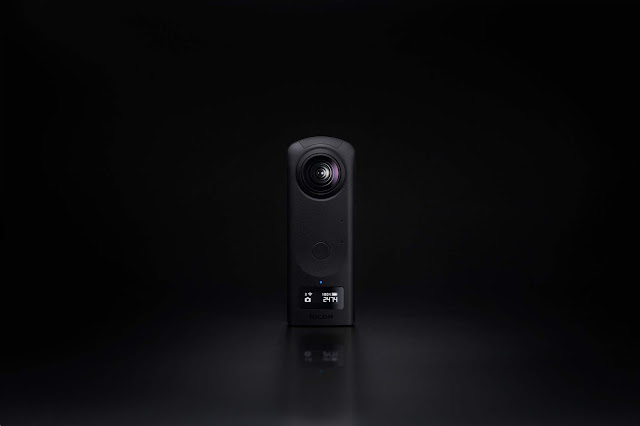 Since RICOH launched the world's first 360-degree consumer camera*1 in 2013, the company has stayed at the forefront of this emerging technology as it continues to evolve, and become an integral tool for the burgeoning industries of virtual reality (VR), social media, business, real estate + more. Exceptional imaging and sleek design come together to deliver unique, expected visuals; a seamless integration into any element of everyday life - business or pleasure.

The RICOH THETA Z1 is the flagship model of this series, with RICOH deploying exceptional optical and image processing technologies, cultivated through years of high-performance camera development, to pursue its highest resolution and quality to date. The compact main body is equipped with a 1.0-inch back-illuminated CMOS image sensor, enabling approx. 23MP resolution 360-degree still images. It supports a diverse range of shooting modes, such as aperture priority, allowing users to take high-quality images regardless of the setting: outdoors, nighttime, indoors, tropical beaches or snowy mountain views - nothing is off limits. Moreover, it is possible to shoot considerably smooth and immersive 360-degree videos in 4K (3840x1920 pixels) and 30 frames per second (fps) thanks to powerful 3-axis rotational stabilization to compensate for rotational shake.

The main body of the camera, with a 0.93-inch organic EL monitor and a Function (Fn) button, grants users access to a multitude of information at a glance, including number of possible shots, exposure settings, and more, thus greatly improving the operability of the camera itself. In addition to JPEG, RICOH THETA Z1 now supports Adobe® DNG format (RAW) so that users can enjoy professional image editing as with a general digital SLR camera. Basic performance improvements are most evident in the AndroidTM-based system, which now offers flexibility in number of expansions one can add to the Z1 through the installation of additional plug-ins. The overall functionality of the latest model from RICOH not only meets the high demands of serious photographers, offers an optimal performance for professionals and amateurs alike.

Opportunities to use 360 images in innovative ways are increasing at a rapid pace. RICOH THETA is heavily utilized in business use cases around the world. Advanced services leveraging RICOH THETA V in real estate and construction are offered by Ricoh Tours, Zillow 3D Home, Matterport Capture, and HoloBuilder JobWalk, and future integrations with these partners services and the new RICOH THETA Z1 are planned.

RICOH'S THETA Z1 will be available to preview up ahead of its official release at the RICOH Imaging booth during CP+2019, the world's premier show for Camera and Photo Imaging held at PACIFICO Yokohama this February 28, 2019.

*1 As a mass-produced consumer product capable of capturing the scene around, above and below the device in a fully spherical image (as of October, 2013, based on RICOH research).

The company operating now as Ricoh Company Ltd. was originally founded in 1919, under the name Asahi Optical Joint Stock Co. and launched its first SLR camera in the 1950s under the PENTAX name. Today, the company continues to produce the heritage-rich, award-winning line of PENTAX DSLR cameras, lenses and sport optics equipment as well as Ricoh's offering of stylish and compact digital cameras, known for their wide-ranging, rich set of features.

1. 23MP resolution 360-degree still images using a large sensor and a new type of lens unit
The camera is equipped with a 1.0-inch back-illuminated CMOS image sensor, one of the largest for consumer 360-degree cameras. It incorporates two units that can support about 20M effective pixels, achieving high-resolution 360-degree images equivalent to about 23M still image output pixels. Moreover, it supports the best of ISO6400 high-sensitivity shots, showing its strength in night and dark indoor shots. The lens unit uses Ricoh's original tri-fold structure technology, allowing for a slim body of just 24mm*2 despite the large image sensor.
A multi-level aperture mechanism is newly equipped, allowing users to set the F-number to one of the three levels of F2.1, F3.5, and F5.6. In places where the camera can take in a lot of light, by closing down the aperture, the resolution of surrounding areas increases. Moreover, the newly designed lens unit keeps ghosts, flares, and purple fringing down.*２ Excluding lens section

2. A new image processing algorithm and shooting modes to suit the scene
Renewed the image processing algorithm achieved to get low- and high-sensitivity, low-noise, and high-resolution images. Moreover, Dynamic Range (DR) compensation is automatically made for normal shooting, effectively reducing blown out and pitch-black shadows for outdoor locations with brightness contrasts. The camera offers a range of shooting modes, including HDR Rendering, Interval Composite shooting that can be used to record star trails, and Multi-bracket shooting that can take continuous shots with up to 19 settings.

3. High-quality 4K 360-degree videos using the latest image stabilization technology
The camera has 3-axis rotational stabilization while shooting videos to show superior image stabilization. This makes it possible to shoot high-resolution, smooth 360-degree videos in 3840 x 1920 pixels, equivalent to 4K size, and 30 fps (frames per second). Aperture-priority automatic exposure (Av), Shutter-priority automatic exposure (Tv), ISO sensitivity automatic exposure (ISO), and Manual (M) have also been added to the exposure settings, allowing for more meticulous video settings.
The camera has a 4-channel microphone that supports 360-degree spatial audio recording built into its body. Recording omnidirectional audio including both horizontal and vertical directions makes it possible to reproduce sound and video as it was in the environment where the video was shot by linking 360-degree video and audio together. This delivers the enjoyment of creating immersive VR video content and watching videos on large monitors more realistically.

4. Intuitive main body user interface (UI)
The camera has a 0.93-inch organic EL (OLED) monitor that displays shooting information in the lower part of the main body. With nothing but the camera itself, shooting information can be checked at a glance, including remaining battery, shooting mode, the number of possible shots, F-number, and ISO sensitivity.
The new function (Fn) button can be used to switch what is displayed on the organic EL monitor, switch between normal shooting and self-timer shooting, switching between three plug-ins, and switching light out and silent mode.
Shooting settings from a smartphone can be saved as My Settings in the camera (one for still images and one for videos).

5. Support for RAW file format, increasing the joy of editing
In addition to the existing JPEG format, RAW (Adobe® DNG) and JPEG files can be saved in the camera. RICOH THETA Stitcher, an application for stitching in Adobe® Photoshop® Lightroom® Classic CC, will be provided free. After processing files recorded as RAW, the plug-in can be used to generate spherical images in which the seams are invisible. Details about zenith corrections, directional corrections, and stitch distance setting can be freely changed. As with a general SLR camera, users can enjoy professional editing of hues and image quality.

6. A variety of ways of sharing
Users can directly post 360-degree spherical images shot using the camera to Facebook or upload them to the theta360.com dedicated website and share them on social networks such as Twitter and Tumblr. Unique cropped images can also be shared with Instagram. It is also possible to submit captured spherical videos to YouTubeTM360-degree channel and images to Google MapsTM.
"Remote Playback" for 360-degree video is installed as a plug-in. Using a general-purpose receiver equipment*5such as a compatible wireless display adapters it is possible to mirror playback of 360-degree still images and video data stored on the camera. This allows users to enjoy powerful 360-degree video on large displays or over projectors by operating the camera.

7．Robust and luxurious design
The camera employs a lightweight and robust magnesium alloy for the body materials. It not only ensures robustness that can withstand severe use, but texture casting on the surface gives a luxurious texture that is suitable for a high-end model.
Metal tripod screw holes are set in anticipation of use in harsh environments. Moreover, the external connector uses the next-generation standard of USB 3.0 (Type-C) to allow for even smoother transfer speeds. The shape is top–down symmetrical, so it can be inserted either way.

8. Superior scalability through updates and plug-ins
Following on from the RICOH THETA V, the camera uses Qualcomm's SnapdragonTM and an Android-based operating system. Firmware updates facilitate continuous functional expansions and performance improvements.
Users can access a variety of expanded functions by installing various plug-ins. Besides Ricoh genuine plug-ins, an environment was built for adding and using plug-ins releases by general developers through the RICOH THETA Plug-in Partner Program.

Lens Cap TL-2
Compact dedicated cap to protect the lensThe special material used on the inside and dedicated design protect the lens from damage when inserted or removed, and it can be attached to the bottom of the main body, so that users can place the THETA on a flat table with enough stability for shooting.

Semi-hard Case TS-2
A dedicated semi-hard case that protects the camera body. It uses synthetic leather on the outside and microfiber fabric on the inside to ensure both protection and excellent texture.
A cutout in the lower part of the case allows users to store the camera with Strap Attachment AT-1 or Extension Adapter TE-1.