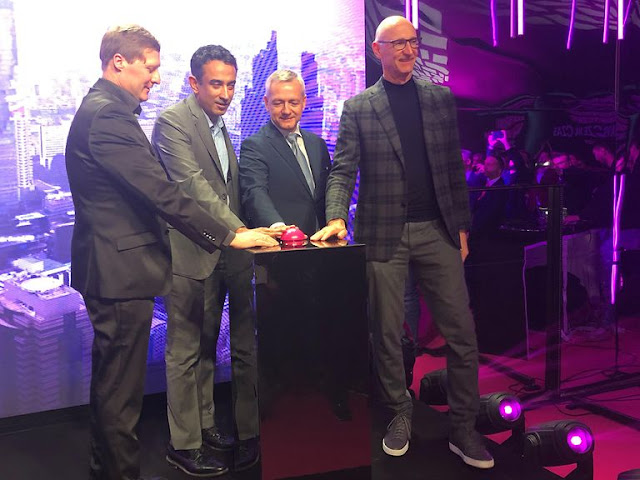 T-Mobile Polska has launched the first fully functional fifth generation mobile network in Poland - its coverage is currently available in the centre of Warsaw. T-Mobile commits itself to investing in and continuing development of the 5G network in the coming months and years, extending it to more locations and cities so it ultimately coversthe entire country.

On the 7th December, in Warsaw at the #5G_LAB centre, the Minister of Digital Affairs and the representatives of T-Mobile inaugurated the launch of the 5G T-Mobile network, the first fifth generation network in Poland. Devices providing access to the network have been distributed to selected T-Mobile partners, so they can be used in order to develop new business solutions and products, which will be eventually offered on the mass market.

Marek Zagórski, the Minister of Digital Affairs, represented the state authorities at the event and T-Mobile was represented not only by the CEO of T-Mobile Polska, Andreas Maierhofer but also Chairman of the Management Board of DT Group, Tim Hoettges, as well as Srini Gopalan, Management Board Member for Europe at Deutsche Telekom AG. The launch of the 5G network is a continuation of the declaration made a year ago by Tim Hoettges, who announced that Poland is one of the key markets for the DT Group and one of the first countries in Europe that will take advantage of the fifth generation network from T-Mobile.

"We do not wait for the future; we create it today for Poland by building and launching the first 5G network in our country! We are well aware of how important role 5G plays in the development of an innovative economy and creating development opportunities for the whole society. This conclusion has found its way to the "2020 Responsible Development Strategy" document. We are happy that we can now act on our commitments," said Andreas Maierhofer, the CEO of T-Mobile Polska. "It's noteworthy that the installation we have launched today is not just an isolated test of our technology, but an actual fully-fledged network of the fifth generation, which we will gradually expand and spread to other cities, to ultimately cover the entire country."


As predicted in the analyses published in the "Responsible Development Strategy", the launch of the 5G network in Poland is the baseline of the fourth industrial revolution and the formation of Industry 4.0, which will boost the economy, thanks to greater innovativeness and make the country more competitive globally.

From the point of view of an individual citizen, 5G is above all a chance to improve the quality of life. Thanks to the network's capacity, it will now be able to constantly monitor health using sensors that track the key vital functions, and its high reliability allows to carry out remote medical consultations or even remote surgical operations. The 5G network will certainly offer completely new possibilities in entertainment, from truly mobile and delay-free gaming to fully immersive broadcasts of music concerts and sporting events powered by virtual reality solutions.

5G will also be widely used in agriculture, where the mass use of sensors controlling soil temperature, hydration, and the harvest condition, coupled with the automation of farm animal husbandry will increase productivity and limit the use of chemicals. It will also bring major changes to industry and the labour market, where automation of manufacturing processes will allow the creation of truly smart factories, smoothly responding to changes in demand or in the prices of raw materials, and cooperating with other facilities in an automatic manner. It will also create new jobs for professionals and increase mobility, thanks to systems that support on-the-job training and facilitate access in real-time to information and instructions for even the most challenging tasks.

The 5G network also means new perspectives for the development of smart cities, where, for example, a network of miniature sensors embedded in all parts of urban infrastructure will help control traffic, streamline waste disposal, manage parking spaces, and even deliver measurable savings, thanks to smart street lighting.

"The highest quality of the network is the priority, and it is the most important feature that makes T-Mobile stand out from its competitors. Apart from the best coverage and data transmission speed in the LTE network, we now have yet another argument to support this claim. It is T-Mobile that launched today the first real, functional and fully-fledged 5G network in Poland, which is based on commercial solutions and has been made available to our partners," said Thomas Lips, Chief Technology and Innovation Officer at T-Mobile Polska. "Even now, we are working hard towards the integration of the fifth generation network with our 3G and 4G commercial networks as well as the broadening the base station coverage."


As at the day of launching the 5G network, T-Mobile operates five base stations spreading network coverage across the centre of Warsaw. The 5G system in the 3.5 GHz band with a 100MHz channel bandwidth has been made available on every station. The 5G signal is broadcast by antennas, which support technological solutions that are essential to 5G, which involve forming and tracing the beam to the individual user's location as it changes (called beam forming and beam tracking). They ensure connections of the highest quality. Each of the base stations used in the project was thoroughly adapted and prepared for the launch of the fifth generation network, and they were all connected to the network via fibre optic technology supporting 10Gb/s.