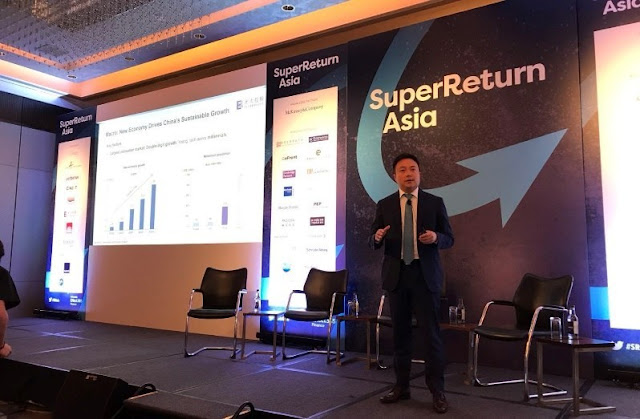 This year, SuperReturn has placed a strong emphasis on the latest innovations in Asia and Silicon Valley, holding numerous in-depth discussions on the emergence of the digital industries in China including AI and health sectors, as well as Initial Coin Offerings (ICOs), providing accurate and timely market updates to address the audience's concern with potential economic headwinds swirling ahead. Despite facing the market backlash of the Lehman Brothers company crisis 10 years ago which eventually led to a major economic downturn, Victor and his team has resurged strongly, seizing and controlling the momentum of China's new economy to create an extensive and well-curated economic investment portfolio.

Featuring a staggering number of 60 investment projects in a short span of 2 years, it includes 30 lead investors, 20 unicorn companies, and 10 completed Initial Public Offerings (IPOs) and M&A. However, for Victor and China Everbright's new economy, this is only the beginning. For the next 10 to 20 years, he strongly believes in the immense potential that AI holds to create a vast ocean of possibilities, encompassing unprecedented opportunities far beyond the internet age. In his search for the next giants of this AI era- the next Tencent, Baidu and Alibaba, Victor shared his thoughts and findings in the speech.

At the conference, Victor demonstrated the revolutionary "intelligent closed-loop model" - DCIA LOOP, a model stemming from several years of research from China Everbright's new economy Investment Team, who had previously analyzed numerous case studies in this pioneering field of artificial intelligence. Through these research projects, Victor's team has established a new methodology to discover the richest areas of potential within the AI industry. "Using the DCIA LOOP, we can explain how AI-related technologies empower traditional industries to tap into the potential of AI technology," Victor commented. "By using this model, I that believe we can unlock the next level of economic growth with AI."

To understand the intelligent closed-loop model, DCIA can be segregated into four steps: Digitization, Connectivity, Intellectualization and Automation.

Firstly, "Digitization" plays the crucial role as the foundation. Typically, during the transfer process of moving businesses online, users tend to collect data through the Internet of Things (IoT). For example, e-commerce platforms are more likely to provide better advice than offline stores because they have a better, all-rounded understanding of their consumers' online profiles and preferences. For the industries that face difficulties towards full digitization, the usage of IoT for data collection is highly prevalent. For example, a smart city solution provider can conduct its city monitoring via the deployment of a large number of cameras and sensors.

Secondly, "Connectivity" refers to data collection through users or devices from an interconnected network. When deriving data from a single device without its connected counterparts, it can be extremely difficult to execute a proper situational analysis. For supercomputers to draw logical conclusions through big data mining, it is most optimal for platform-level overarching data to be displayed. For example, to facilitate smooth traffic conditions, a constant line of interconnected operations and data streams must be secured between all vehicles, traffic lights and other related infrastructure to ensure that the entire transportation system works in tandem to mitigate potential accidents.

Next, "Intellectualization," has remained as the hottest topic in recent years. Computer vision algorithms can help machines to communicate through the natural language processing technology that enables machines to understand each other, allowing for machine learning to support large business operations. In recent years, the underlying technology of such actions has taken a huge step forward. Machine learning holds the ability to help humans make more informed, intelligent decisions.

Lastly, "Automation" completes the technological loop. The implementation of an "AI LOOP" happens in the case where menial tasks and labor are eventually replaced by mechanical or virtual robots. One of the most commonly observed cases of automation are the usage of warehousing robots.

In addition to these four steps, the key to the intelligent closed-loop model is complete industry integration. The full potential and efficiency of model integration can only be materialized upon combination with the industry's inner-workings and current processes. Some of these companies include industries encompassing entertainment -- iQiyi, local services -- Meituan Dianping, as well as logistics -- JD Logistics. Among them, iQiyi and Meituan Dianping have been publicly listed, becoming second-in-value to only the first-generation giants known as Baidu, Alibaba, and Tencent (BAT).

Additionally, Victor also mentioned that the process of upgrading traditional industries to adopt intelligent technology still requires substantial preparation. The DCIA LOOP is disrupting and transforming conventional internet-based markets as well the financial services, retail and entertainment industries. Victor believes that the next billion-dollar opportunities will hail from the education, medical, tourism, energy and manufacturing industries. Through the application of DCIA LOOP to these developing sectors, the China Everbright new economy team is well-positioned to discover the next-generation of unicorns.


Keeping Pace with the Times and Pursuing Value Investments

China's economy is developing at an incredible pace. With the integration and implementation of technologies such as 5G, AI and IoT, the vast opportunities of the AI industry are near-limitless. However, before embarking into any new business ventures, Victor stresses upon the need to understand and address potentially adverse issues that may negatively impact the business' future growth. To combat the development of a bubble forming in the AI markets, the China Everbright new economy team actively seeks value investment opportunities, a hallmark of a reliable investment institution. These value investments utilize the investment method of advancing with the times to find companies that can withstand long-term challenges to emerge as outstanding enterprises after undergoing industrial transformation.

When it comes to investments within China's AI sector, the current horizon looks promisingly well-funded. A major player in this field, the China Everbright's new economy team boasts an impressive Assets under Management (AUM), with its total valuation exceeding US$ 3 billion. As stated by Victor, only by investing money in the right projects and companies that can truly create real value in the long-run, will investors be able to draw out the full commercial possibilities of industrial development.

From the perspective of Victor and his team, the growth of the new economy started from the emergence of new data assets and the development of the Internet of Everything (IoE), which will eventually lead to many intelligent decision-making opportunities. As China holds the largest global population with the biggest potential data pools, it is the optimal location for the application and testing of technologies such as AI and IoT, which require continual new data inputs.

Using the AI field as an example, both the strength of AI-related research and human talent pools, alongside China'sinvestment budget in AI development are among the highest in the world. Despite the overall slowdown in economic growth, China remains as the world's second-highest country in terms of GDP, with a stable annual economy growth rate. In addition, powered by China's massive population of 1.3 billion people, the country's growing consumption of new technologies will bring about sustainable growth.

In 2018, under the storm of new asset regulations, nation-wide deleveraging and unabated Sino-US trade wars, the raising of sufficient funding has become a challenge. Despite these unfavorable environments, China Everbright has managed to consistently achieve good performance in its investments through strategic capital outlays and the two-way layout of RMB and US dollar funds. Limited partners (LPs) need to re-examine investment opportunities in the new era, and carefully choose General Partners (GPs) that are more responsive and adaptive to new economic investments to keep pace with the times.


Leading China's New Economy in the Next Decade with AI Technology

As highlighted by Victor, according to the industry indices released by Caixin Global, the growth trends of the internet and mobile industries has slowed down considerably. From the all-encompassing power centers created by China'snetwork of industry titans in the internet sectors, it has become extremely difficult for small enterprises and new players to find a competitive edge in the current market, which in turn leads investors to sour on investing.

At the conference, it was noted that just as the last decade was heavily influenced and driven by the Internet, the future decade will be driven by AI. Firstly, new data can meet the needs of AI in both quality and quantity. Secondly, the commercialization of Narrowband IoT (NB-IoT), a Low Power Wide Area (LPWA) technology developed to improve device power efficiencies, system capacities and deployment connectivity, and 5G makes high-speed IoT applications possible, such as autonomous driving and the possibility of smart cities -- one of the most important aspects of AI. Thirdly, machine learning and deep learning algorithms are gradually moving toward being open-sourced, reducing the barriers to entry for AI innovation. Finally, GPU supercomputers and edge computing will make AI-powered smart decision-making in various industries more viable.

The China Everbright new economy team is strongly equipped to play the crucial role of bridging the current industry gaps, such as the combination of technology and capital. The team's investments in major industries including entertainment, consumer finance, e-commerce and automobiles have propelled these companies to become leaders in their respective fields. Through China Everbright's comprehensive platform, these AI-empowered companies are forming an intelligent closed-loop ecosystem of resource and data sharing, which will continue to evolve and eventually transform into becoming the main driving force of China's new economy.

The China Everbright new economy team believes in the coexistence of risks and opportunities, just as great companies coexisted alongside economy bubbles, including Google and Tencent in 1988, Alibaba in 1999, and Baidu in 2000. In this upcoming AI era, it is strongly believed that many AI unicorn companies will emerge over time. The team's ultimate mission is to discover the companies that are resilient enough to last through the battles and obstacles of the current economic cycle to usher in the next era of AI; one of the biggest business opportunities that China will experience for the next 10 to 20 years.