Carfax: Flooded Cars Back On The Road Jumps 47% Over Past Year 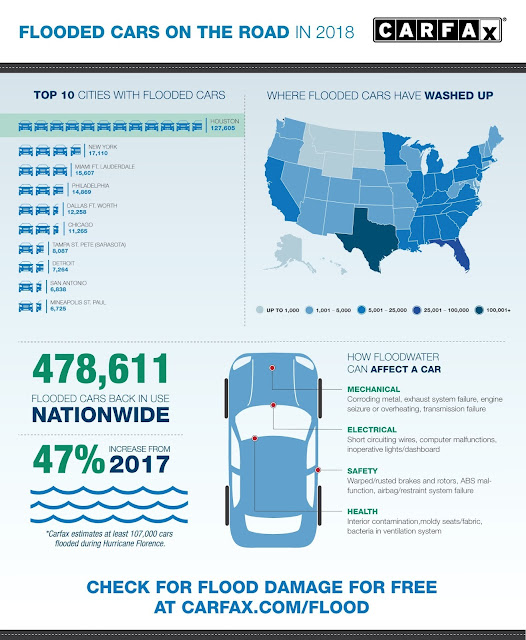 Carfax is warning consumers that more flood damaged cars have resurfaced across the country. New research from Carfax suggests that over 478,000 flooded vehicles are back in use, either on the road or up for sale. That figure is a 47% increase – more than 150,000 additional cars – from 2017, when hurricanes Harvey and Irma devastated the Gulf Coast and Southeast.

With two major hurricanes impacting the U.S. this year, the number of flooded cars cleaned up and resold will likely grow. Carfax estimates at least 107,000 vehicles were damaged during Hurricane Florence. To help protect consumers, Carfax is letting them check for reported flood damage free of charge at carfax.com/flood.

Vehicles reported as flood damaged by a state's Department of Motor Vehicles (DMV), Canadian province, insurance companies and more are in use in every state, and these ten states have the most (percent increase over 2017):


The top five metropolitan areas with the most previously flooded cars back in use are Houston, New York City, Miami, Philadelphia and Dallas.

"Our data suggests that severe weather events, especially historic ones like Harvey and Irma, have a nationwide impact. This surge in flood cars also underscores the importance of identifying these waterlogged wrecks before it's too late," said Dick Raines, president of Carfax. "Flood cars can resurface no matter where you live, so we urge car buyers and sellers to use the resources available that will best protect them. Vigilance is key; start with a vehicle history report, mechanic's inspection and thorough test drive to help prevent con men from ripping you off."

There are safety, health and financial concerns about flooded cars. Water can compromise the mechanical, electrical and safety systems of a vehicle, turning them into ticking time bombs. Hazardous mold and bacteria may develop in the soft parts of the car. Plus, unsuspecting buyers often pay thousands more than a flooded car is worth.