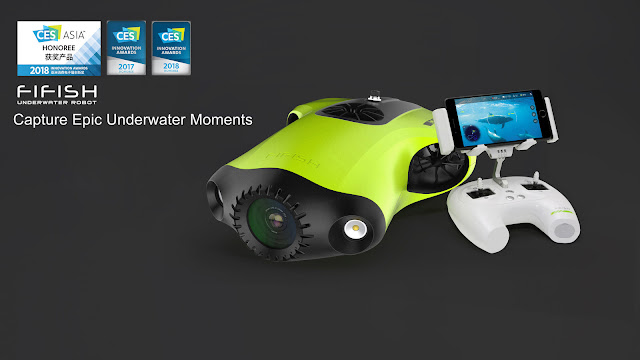 After months of waiting and arriving slightly earlier than expected, FIFISH P3 has already prepared to ship and met customers. Some of the top reviewers have taken an early look at FIFISH P3, all of them spoken highly of it and said FIFISH P3 is really cool with the best camera they have seen.

Started R&D 2 years ago, FIFISH team have spent two years in product development stage and have made huge breakthroughs upon underwater industry. FIFISH P3 has won lots of international awards like GDA, GIC, CES Innovation Award and was honored with Innovation Award of CES Asia this year.

In a degree, FIFISH P3 has achieved something that other underwater drone continue to chase. The camera has obvious advantage comparing with other underwater drone in current market. FIFISH team specially designed underwater lens, which is with ultra wide angel of 162 FOV, can take 4K video and 20 Megapixel photos, combining with abundant lighting with 4000 lumens, ensures truly great underwater shots. The stabilized camera with shooting algorithm is a great guarantee for stable footage.

FIFISH P3 is an evolution of what underwater drone has been doing since its beginning. Extremely dynamic streamlined curve and sleek sports car modeling make it could operate smoothly and flexibly in the water, six directions of movements, 2 hours operating battery life, 100 meters working depth, watching the epic moments in 1080P real-time streaming via FIFISH app etc. If you choose FIFISH P3, you will get more bang for buck.

On CES Asia 2018, FIFISH P3 had a live show about Palau underwater shooting. FIFISH P3 has unveiled the mysterious underwater footage via real-time. It got lots of "Wow "factors about the resolution, reliability and stability of FIFISH P3 performance.

Established long-term partnership with distributors in USA, Japan, Australian and North Europe, FIFISH global sales director declared that FIFISH P3 has already got millions of orders. It will be shipped from the middle of June with retailer price of $3499.