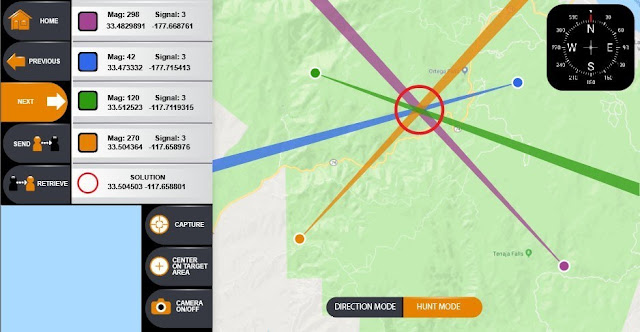 Firestorm UAV Inc. (https://www.fsuav.com/) recently announced its position as the sole supplier of an innovative handheld search and rescue sensor intended for all types of field-rescue operations. The mobile TigerStrike Lite hardware pairs with Firestorm's unique iRDF™ technology to position the company as the foremost expert and manufacturer of mobile ISR search and rescue signal readers.

The TigerStrike Lite mobile device reads three different types of distress signals: personal locator beacons (PLBs), emergency locator transmitters (ELTs) and the emergency position indicating radio beacons (EPIRBs) used in maritime applications. To find a signal's location, the TigerStrike Lite device simply takes a single vector reading from two fixed locations. Generally this is all that is required to pinpoint a signal to within an accuracy of five degrees.

The signal's location can then be sent via an Android-based smartphone to the operational base of choice. Each vector is transmitted via Bluetooth to the smartphone (already pre-equipped with the TigerStrike Lite app) which is physically mounted on top of the TigerStrike mobile unit. Rescuers are provided with a sophisticated analysis, route and ETA to the target area. Never before has search and rescue used both the power of smartphones and the connectivity of IOT to such potential life-saving effect.

TigerStrike technology was developed for first responders and was successfully tested by the United States Navy in a trial SEAL recovery operation under a UAV. This was the first successful demonstration of a UAV-based radio direction finding system. Firestorm UAV's TigerStrike platform can detect and triangulate a distress signal in seconds, meaning qualified operators require no special training to get the most out of the technology. Data processing is managed entirely by the onboard, proprietary software included with each handheld TigerStrike Lite unit. If needed, the unit can even be directly mounted under a UAV. TigerStrike Lite is also the first of its kind to combine a sophisticated antenna and receiver designs with its unique software package. This signal-smart technology filters out ambient noise to more quickly identify any emergency beacon that it is tuned to find.

Firestorm UAV's mobile hardware is informed by the cutting edge TigerStrike Lite ISR platform, powered by Intelligent Radio Direction Finding (iRDF™). TigerStrike Lite combines advanced GPS applications and signal processing to bring pinpoint precision to an ISR market that has long been financially out of reach for the average, hometown search and rescue operation. Until now, field beacon readers could cost 10s of thousands of dollars. Most TigerStrike Lite packages hover around $2,495.

"As the culmination of the needs of generations of search and rescue teams all over the world, the TigerStrike Lite will reinvent how future search and rescue operations are conducted. We're proud to say that no other company has anything comparable with TigerStrike's level of sophistication. Instead of just looking for people or crash sites, we've created a portable and affordable device that actively hunts for the radio signals emitted by PLBs, ELTs and EPIRBs. And that is the critical difference between finding people in enough time to save their lives, and finding them days later when it's too late," said Firestorm UAV founder Murray Craig.