The NEOGEO Mini, A Video Game Console Celebrating The 40th Anniversary of SNK's Brand Is Announced 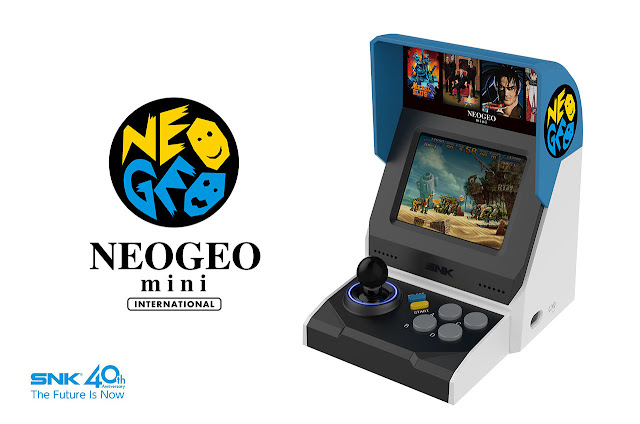 SNK CORPORATION is proud to announce the NEOGEO mini, a video game console celebrating the 40th Anniversary of the SNK brand.


The NEOGEO mini is a video game console, which will include 40 nostalgic titles from the NEOGEO system, which made its debut in 1990. This console will feature a 3.5 inches display, meaning the games can be enjoyed with no need to connect to a TV or monitor. The size of the NEOGEO mini means it fits perfectly in the palm of one's hand. The NEOGEO mini will be available in two different designs, one for the Asian market and the other one for overseas markets (for North America, South America, Europe and other regions). With its design in black, white, and red, the Japanese version of the NEOGEO mini will faithfully reproduce the original NEOGEO arcade cabinet that was introduced in Japan in 1990. The overseas version will be a simple and modern design in black, white and blue.


We hope you look forward to enjoying the NEOGEO mini along with its legendary and popular NEOGEO titles.


For more details such as the release date and title lineup, please stay tuned for future announcements.

NEOGEO is the name of the video game platform that made its debut as both an arcade and a home system in 1990. The NEOGEO was a unique system where arcade games had the form of cartridges instead of the traditional boards. NEOGEO arcade cabinets could feature multiple titles at once, leading to significant cost reductions, and a vast presence of NEOGEO games throughout Japan in most game centers, supermarkets, and traditional snack shops. Moreover, the cartridges of the NEOGEO home system used ROM software with the original arcade games, and allowed players to experience at home the same level of quality they could find at the arcades. With its cartridges with over 100MB of memory, the NEOGEO video game system was extremely popular among game fans.

*All in-game screenshots displayed are work-in-progress. Gameplay screenshots are collage.
*Please note that design, and specifications might be changed with no prior announcement.