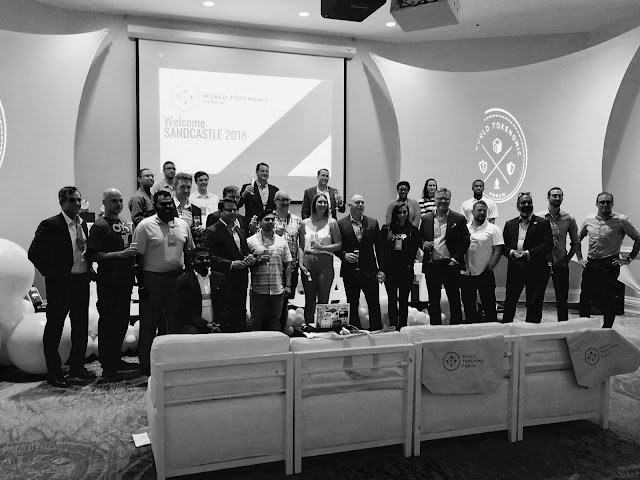 World Tokenomic Forum held its inaugural Annual Summit of members last week in Grand Cayman and hosted 16 highly vetted early stage companies in its Sandcastle Startups Challenge competition on day one. Over a five hour span, the teams competed in high-velocity pitch challenges, side by side on stage, bracket-style, in front of four judges and the membership body of World Tokenomic Forum. In the final matchup Swytch.io and Intiva Health went head to head in an improv pitch battle featuring 30 second and 15 second bursts, and when all the votes were counted Intiva Health took the Grand Prize.

"Back in January the search for the best of the best began for the inaugural Sandcastle Startups Challenge Sweet 16. 137 challengers entered from over 17 countries, and the 16 finalists from a myriad of industry segments proved one thing through their efforts on stage this week to all in attendance. If you were wondering with blockchain technology 'If there is a there, there' the question is a resounding Yes!" said Chris J Snook, Chairman of World Tokenomic Forum.

"Sandcastle was intense, with stiff competition! I was humbled and honored to be a part of a group of such impactful projects and leaders. The win was sweet validation to all the hard work my team has put in," said John Hartiganof Intiva Health.

The hunt for the next group has already begun and interested early stage companies can opt-in at www.sandcastlechallenge.com for alerts on how to enter for 2019. The World Tokenomic Forum will now take several of the Sandcastle Sweet 16 teams around the world as it works for their schedules to further connect them to enterprise buyers, investor syndicates, and policy makers to assist in their efforts to build traction in the marketplace and provide proof points of the possibility of blockchain technologies across multiple verticals and industries.


World Tokenomic Forum
A social-enterprise premium membership consortium rethinking the think tank and convening the world's leaders in cryptocurrency, government, capital markets, and technology. World Tokenomic Forum is the leading international organization for enabling public-private cooperation, economic interoperability, and innovation as we move to a new economic order in a token economy. Sandcastle Series is globally headquartered in the special economic zone of Cayman Enterprise City in Grand Cayman with World Tokenomic Forum having a North American headquarters in Scottsdale, Arizona; and a satellite office in Delhi, India and opening Tallinn, Estonia in Summer 2018. www.worldtokenomicforum.com