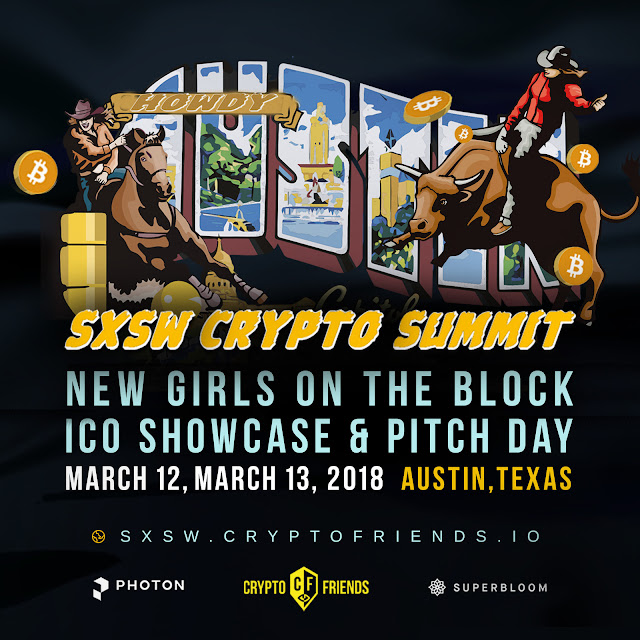 The first ever blockchain-focused summit to run during SXSW is set to be held in Austin, Texas on March 12th & 13th, with some of the most influential, international women in blockchain and fintech set to headline the agenda. Under the name 'New Girls on the Block,' the first day of the SXSW Crypto Summit will feature keynotes, a series of fireside chats and panel discussions covering all the major topics currently at the forefront of the blockchain universe.

Currently women comprise just 5% of startup owners and, last year, venture capitalists invested just $1.46 billion in women-led companies compared to $58.2 billion in investments for male-led ones. Blockchain represents arguably the best opportunity to level the playing field for women in tech thanks to the opportunity to raise critical finance through Initial Coin Offerings (ICOs). Gender diversity remains a challenge, which is why 'New Girls on the Block' aims to showcase female blockchain pioneers and highlight the significant roles women are playing in this emerging industry.

Daria Arefieva, CEO of CryptoFriends, the co-hosts of the summit with Superbloom and Photon, says, "There are some incredibly talented and successful women in the Blockchain community already doing amazing things. However, at most industry events you still a more male dominated environment. In fact, a recent survey revealed that women make up just 1.76% of the blockchain community. Blockchain is one of the most disruptive technologies we have ever experienced, so we want to encourage more women to get involved and lead the way in shaping its future."

The SXSW Crypto Summit is a perfect opportunity for blockchain enthusiasts and the crypto-curious to hear from industry leading experts. In addition to New Girls on the Block, the event will feature a mix of educational content, debates, ICO pitches and exclusive networking opportunities.

SXSW Crypto Summit will also provide blockchain start-ups the opportunity to pitch their ICO to prominent investors on day two. ICO pitches have become a staple edition to the CryptoFriends lineup, with millions of dollars raised through token sales launched during previous events. ICO teams can apply for a spot by emailing hello@cryptofriends.io

Tickets are available now at https://sxsw.cryptofriends.io/ priced from $399 for non-VIP entry, with other options available which include full SXSW festival passes and access to exclusive crypto networking events.

CryptoFriends is a group of professionals with an exclusive network of smart connections throughout the crypto community. We organize high‑end blockchain‑themed events whilst bringing together leading industry experts, thought leaders, blockchain professionals, startups and enthusiasts. For more information please visit https://cryptofriends.io/