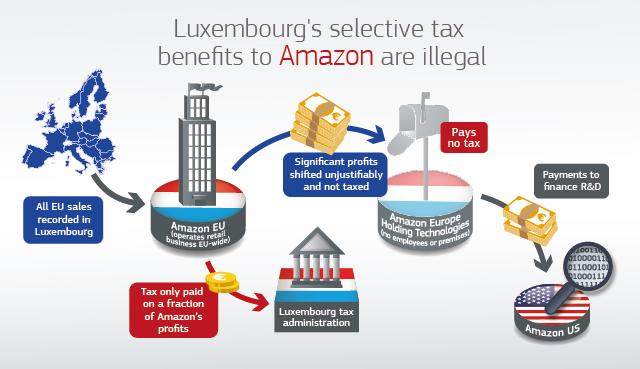 European Commission orders Amazon to pay back about €250M in taxes to Luxembourg, saying it had been given “sweetheart” tax advantage since 2003


The European Commission has concluded that Luxembourg granted undue tax benefits to Amazon of around €250 million. This is illegal under EU State aid rules because it allowed Amazon to pay substantially less tax than other businesses. Luxembourg must now recover the illegal aid.


Commissioner Margrethe Vestager, in charge of competition policy, said "Luxembourg gave illegal tax benefits to Amazon. As a result, almost three quarters of Amazon's profits were not taxed. In other words, Amazon was allowed to pay four times less tax than other local companies subject to the same national tax rules. This is illegal under EU State aid rules. Member States cannot give selective tax benefits to multinational groups that are not available to others."

Following an in-depth investigation launched in October 2014, the Commission has concluded that a tax ruling issued by Luxembourg in 2003, and prolonged in 2011, lowered the tax paid by Amazon in Luxembourg without any valid justification.

The tax ruling enabled Amazon to shift the vast majority of its profits from an Amazon group company that is subject to tax in Luxembourg (Amazon EU) to a company which is not subject to tax (Amazon Europe Holding Technologies). In particular, the tax ruling endorsed the payment of a royalty from Amazon EU to Amazon Europe Holding Technologies, which significantly reduced Amazon EU's taxable profits.

The Commission's investigation showed that the level of the royalty payments, endorsed by the tax ruling, was inflated and did not reflect economic reality. On this basis, the Commission concluded that the tax ruling granted a selective economic advantage to Amazon by allowing the group to pay less tax than other companies subject to the same national tax rules. In fact, the ruling enabled Amazon to avoid taxation on three quarters of the profits it made from all Amazon sales in the EU.