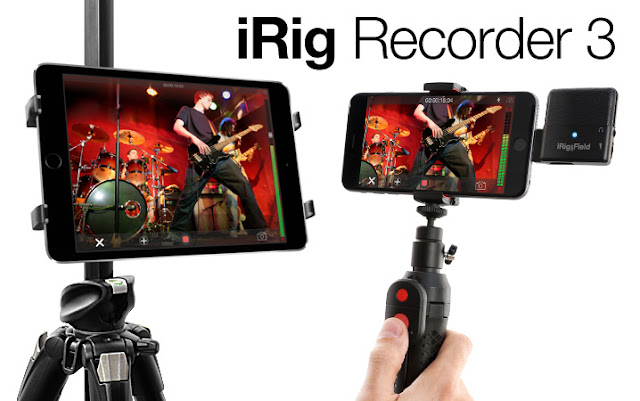 IK Multimedia announced the release of iRig Recorder 3, the new version of the popular audio recording app which now supports video recording plus includes a wider collection of pro audio effects, expanded sharing capabilities via a number of online services and social media as well as professional exporting features. iRig Recorder 3 now allows users to finalize superb sounding audio/video recordings directly on their device, share them with the world or export them for further editing.

While there are many video recording apps available, very few of them focus on an easy way of getting professional sounding audio tracks together with the recorded video. iRig Recorder 3 solves this problem, starting from a powerful audio recording engine and adding video recording capabilities for a truly complete content production solution. With more and more musicians, video-makers, bloggers, journalists, web professionals and enthusiasts willing to share their videos at a higher-than-ever quality, IK Multimedia have focused on giving them everything they need to record serious audio and video at the same time, anywhere. Whether for recording "selfie" videos, live performances, lectures, speeches, interviews and much more, iRig Recorder 3 is aimed at both professionals and enthusiasts who need a tool capable of higher versatility when it comes to creating ready-to-share, high-quality video with great audio directly on their iPhone and iPad.


iRig Recorder 3 supports both portrait and landscape audio and video recording, allowing iPad users to take advantage of the full size of their device's screen for previewing and capturing higher quality videoclips. Together with IK's iKlip Grip range of multifunctional camera stands for iPhone, or iKlip Xpand mounts for iPad, iRig Recorder 3 provides a great solution for shooting professional audio/video anywhere, on the go.

iRig Recorder 3 now comprises an expandable collection of up to 17 professional effects such as Normalize, Stereo Imager, Compressor and 3-band EQ as well as creative audio effects such as Morph, Reverb, Chorus and Delay. They can be applied to the audio recordings for sound optimization and creative purposes, doubling the number of effects available in the previous version of the app.


Natural fade ins/outs can also be applied to the recording in order to create natural transitions before exporting the final project.


iRig Recorder 3 is ideal for use with IK Multimedia's full range of portable iRig audio interfaces (both single and dual channel) and microphones for superior audio quality in the studio or on the field, and includes convenient, easy to-use on-screen waveform editing functions.


Works well with other audio apps

For all those musicians who want to record and share their musical performances while playing with their favorite audio apps, iRig Recorder 3 offers complete AudioBus and Inter-App Audio compatibility, which means it can seamlessly receive audio from other IK apps such as AmpliTube, SampleTank, VocaLive, EZ Voice (or other third-party apps like GarageBand), and directly record processed audio together with video for great "selfie-style" videoclips that can be socialized immediately.

One of the features that make iRig Recorder 3 stand out from the crowd is its ability to export the recorded content in separate files for convenient editing in a DAW or other third-party video editing software. A convenient, professional-oriented feature that is not found in any other audio/video recording app on the market.

The content created with iRig Recorder 3 can easily be shared via a large selection of online services and social media like Airdrop™, Messages™, SoundCloud®, Facebook®, WhatsApp™, DropBox™, Google Drive™, Microsoft OneDrive™, E-mail, Wi-Fi™, FTP or iTunes™ File Sharing in a variety of sizes and formats.

iRig Recorder 3 is available as a FREE version and as a paid version at a price of only $/€7.99 (includes waveform editing, 8 effects and high-quality wav file export), both offer the option of expanding the effects collection via in-app purchases.