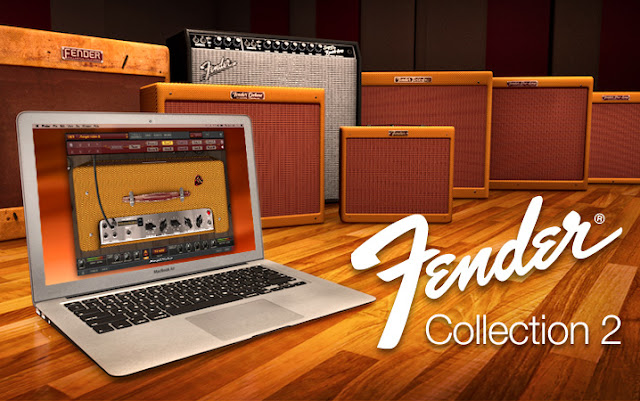 IK Multimedia has announced that Fender Collection 2 for AmpliTubeis now available for Mac and PC from participating retailers worldwide, the IK Multimedia web store, and from the AmpliTube Custom Shop.

Now guitarists wanting that classic Fender tone and power in their digital recordings can easily obtain the unmistakable vintage vibe of classic Tweeds and more with the ease and convenience of the world's most popular guitar and bass tone studio, AmpliTube.

Fender Collection 2 for AmpliTube provides spot-on tone, dynamics and feel thanks to the debut of the evolution of IK's industry-leading modelling technologies. It ushers in a completely new approach to analog modelling, Dynamic Interaction Modeling™, that recreates not only every individual physical component in the amplifier's design, but also the nonlinear behaviour between each component and its effect on other components in the circuit. This approach provides a new unmatched level of realism, touch and feel never before realized in other analog modelled products.


Classic Fender tone on the desktop/laptop

Fender Collection 2 for AmpliTube recreates the historic and diverse Fender legacy in virtual form. IK software engineers worked painstakingly with the Fender engineering team to ensure that each amplifier and cabinet has been rendered with the same degree of integrity and attention to detail that goes into the company's physical products - all controls and operation have been replicated to provide exacting performance and function. The amplifiers and cabinets available in Fender Collection 2 for AmpliTube include officially certified models from the '57 Custom series, including the '57 Custom Twin-Amp, the '57 Deluxe, the '57 Custom Champ, the '57 Custom Pro and the '57 BandMaster. There's also a model of an original '53 Bassman 1x15 featuring an "aging"switch that switches between "new old stock"and a "burned in"model, plus an original '65 Super Reverb.

Fender Collection 2 within AmpliTube Custom Shop and AmpliTube 4 for Mac and PC giving players the world's best-selling ultimate guitar and bass tone studio for their recordings. For AmpliTube 4 users, it is designed to take advantage of all the additional tone-tweaking features like the effects slot between the amp and speaker cabinet and the hyper realistic full-featured "Cab Room"and more.


Plugging in to a world of sound

With IK Multimedia's range of interfaces for Mac and PC, getting tone from Fender Collection for AmpliTube is as simple as plugging into an amplifier. iRig Pro Duo, iRig PRO and iRig HD 2 are the latest generation of high-quality digital interfaces that allow players to plug in and get pristine, pure sound quality from their Mac or PC (or iPhone or iPad).

Fender Collection 2 for AmpliTubeis available now through January 15, 2017 for a special introductory priceof just $/€99.99* from the IK Multimedia online store, the AmpliTube Custom Shop and participating IK retailers. After January 15, 2017, it will be available for $/€149.99.