The Demand For IT Infrastructure Is On The Upswing 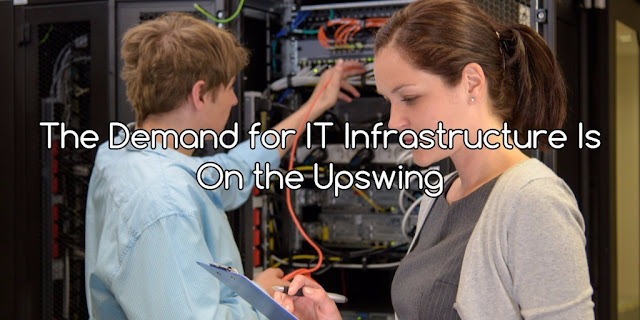 Global Center IT equipment is already Big Business but within the next several years, the market will increase -- reaching more than $101.5 billion in revenue.

That’s according to technology market research firm Technavio, which says that by the year 2019, the demand for more sophisticated equipment will skyrocket because ever-changing technological needs are, again, on the rise. Currently, say analysts, servers are consuming nearly 300 watts of power; much higher than systems of yesteryear at 50 to 80 watts of energy. The company’s technology survey indicates that nearly 27% of a data center’s power usage comes from its computer and IT servers. But with more companies moving toward creating in-house centralized data centers, the number of energy-efficient IT operations is very likely to increase within the next several years.
To understand the comparison, in 2014, for example, the IT development market valued the traditional global rack data center market at more than $21 billion. Those data centers included backup batteries, storage capabilities and switches. Since then, sales of these items (as well as rack servers) have increased because of business growth and the need for more and reliable infrastructure. Companies are increasing their computer and technology budgets to keep up with the expenditure demand. In 2014, the blade server systems market spent more than $9.2 billion that year and the micro-server market was valued at less than one billion dollars. In today’s market, virtual technology with micro-servers is more costly than other server systems but that could change if product vendors can increase innovational development. Also, market growth for micro-server technology may rise as these systems are used in modular data centers.


What’s in an IT Data Center?

Simplistically, it’s a structure that houses servers, storage and networking capabilities -- these elements lead the computers in a business. But as the world of computers and technology continues to evolve, innovations such as flash-based storage, micro-servers and software data centers are also increasing. IT Data Centers typically include:

- Towers, racks, blades and micro-servers that comprise the actual server system
- Storage networks including network attached storage (NAS) and direct attached storage (DAS)
- The Network itself, including routers and Ethernet switches
- Security essentials The trend for businesses building separate data centers for housing all IT equipment is on the upswing.

In addition to containing storage, networking, servers and the like, data centers include security measures to better protect business operations. With new applications and software on the market at any given time, data centers and their operations are also evolving -- that means more and sophisticated program needs.

In the next several years, says Technavio, Software-Defined Networking (SDN) will lead the modern data center in its ability to be flexible and adaptable so that network administrators can better control the operation (without having to engage the company’s computer experts in all aspects of everyday business). This includes (but not limited to) cloud storage centers, analytics, IT security and product lifecycle management; all part of the increasing sales market of computer and networking technology and its infrastructure.


About the report: Technavio ‘s Global Data Center IT Equipment Market 2015-2019 report is based on market analysis from IT equipment industry leaders, major technology producers and vendors, and expected future growth in the marketplace.

Author bio: Katrina is a product specialist for RackSolutions, the market leader for designing and manufacturing custom racking products for the IT industry! You can read more about our company here