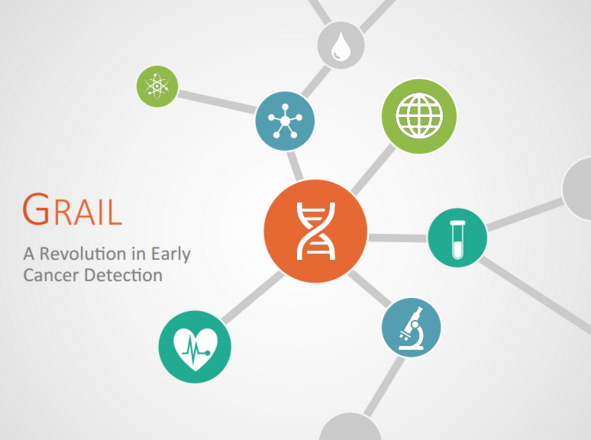 GRAIL’s unique structure enables it to take on this grand challenge. GRAIL has been formed as a separate company, majority owned byIllumina. GRAIL is initially funded by over $100 million in Series A financing from Illumina and ARCH Venture Partners, with participating investments from Bezos Expeditions, Bill Gates and Sutter Hill Ventures. GRAIL’s unique relationship with Illumina provides the ability to economically sequence at the high depths necessary to create a screening test with the required sensitivity and a hoped for level of specificity never before achievable for cancer screening.

“We hope today is a turning point in the war on cancer,” said Jay Flatley, Illumina Chief Executive Officer and Chairman of the Board of GRAIL. “By enabling the early detection of cancer in asymptomatic individuals through a simple blood screen, we aim to massively decrease cancer mortality by detecting the disease at a curable stage.”

“The holy grail in oncology has been the search for biomarkers that could reliably signal the presence of cancer at an early stage,” said Dr.Richard Klausner, formerly Illumina Chief Medical Officer and NCI Director, and a Director of GRAIL. “Illumina’s sequencing technology now allows the detection of circulating nucleic acids originating in the cancer cells themselves, a superior approach that provides a direct rather than surrogate measurement.”

“GRAIL’s rigorous, science-based approach with leading medical and policy advisors worldwide is unprecedented in the fight to defeat cancer,” said Robert Nelsen, Managing Director and Co-Founder of ARCH Venture Partners and a Director of GRAIL.


GRAIL has secured the counsel of a world-class set of industry and cancer experts for the company’s advisory board, including Dr. Richard Klausner; Dr. Jose Baselga, Physician In Chief at Memorial Sloan Kettering and President of the American Association of Cancer Research; Dr.Brian Druker, Director, OHSU Knight Cancer Institute; Mostafa Ronaghi, Chief Technology Officer at Illumina; Don Berry, Professor at MD Anderson Cancer Center; Timothy Church, Professor at the University of Minnesota School of Public Health and Charles Swanton, Group Leader at the Francis Crick Institute. The company will initially have a five-member Board of Directors, including Jay Flatley, William Rastetter (Chairman of Illumina), Dr. Richard Klausner, Robert Nelsen, and the CEO. The company is actively recruiting a CEO.