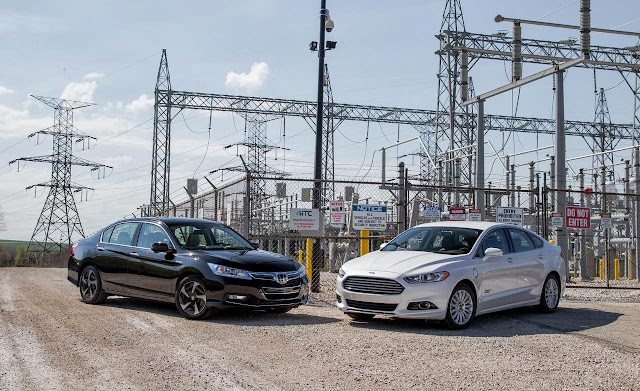 
Ford has somewhat reworked the Fusion for the 2013 model year. The consensus in the marketplace seems to be that Ford has done nearly everything right, starting with the power plant. Under the hood, the Fusion packs an extremely efficient 2.0-liter four-cylinder gasoline engine that's been tuned to the Atkinson cycle and paired with an electric motor for a combined 185 hp. Not to be outdone, the Civic emerges from a recent makeover of its own with an even lighter 1.5-liter four-cylinder with a CVT and electric engine that manages to pull a combined 110 hp.


The fuel economy of these two is very close, with the unique setup of the Fusion giving the Ford a slight edge. The Fusion hybrid can be counted on to deliver 47 mpg, whether in the city or on the highway, while the Civic trails by just a hair at 44 mpg, city and highway. While the CVT of the Civic adds a lot of extra economy to the power system, it's likely that Ford's miracle is due to its engine cycle. You may be forgiven for wondering what would happen if the two technologies were ever brought together in a single vehicle.


While the Fusion has the edge in mileage, the Civic takes the cake for sticker price. The single options package offered by Honda retails at a mere $24,360, while the wider choice of options available for the Ford pushes the Fusion's MSRP to between $27,200 and $32,100. While Honda seems to have gone for the "lighter, cheaper" approach, it's entirely possible that Ford is on to something with its "customer choice" approach to pricing.
Each of these two cars is a modern marvel. Given the present ubiquity of the hybrid, it's easy to forget that just 15 years ago, 47 mpg would have seemed like sorcery. The fact that two giants of automaking have converged on this point—along with more than a few of their competitors—is a testament to the forces driving the market, where many car buyers are now interested in the Ford Fusion hybrid vs. Honda Civic hybrid comparison.

To complete your comparison, be sure to contact multiple dealers to find the lowest price quotes in your area. Then set up a test drive to get the feel for both models.
Author Bio:
Alex Gabriel is a writer at Reply! with several years of digital marketing and copywriting experience. A native of Portland and graduate of the University of Oregon, Alex has a passion for writing about new cars. To learn more about the Ford Fusion Hybrid, see his price guide for new Ford models.