Monday, September 2, 2013
ZTE might not be a name many people think of when asked to name smartphone manufacturers, but the Chinese company is expanding fast and is on its way to becoming one of the major Android phone producers. Their latest phone is one of the cheapest Android smartphones available, with prices as low as £72 in the UK without a contract. Despite such a low price the phone manages to pack in some impressive specifications including a quad-core processor. 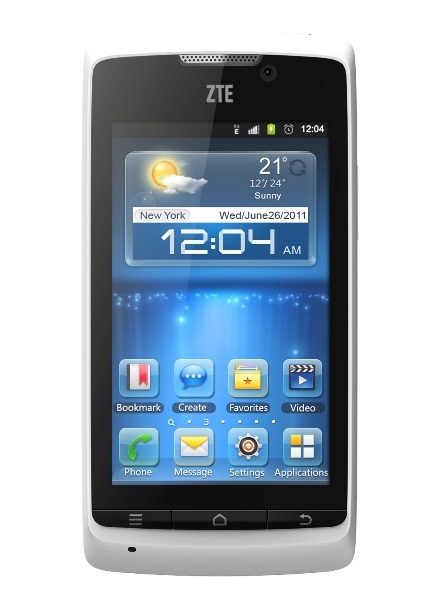 While none of the technical specifications on the device can match the latest flagship high end phones from the likes of HTC and Samsung, this phone outclasses the competition in its low price range. The processor in this device is faster than you'd usually find in smartphone models costing double the price of this ZTE phone. A quad-core processor in such a low cost device is almost unheard of, and only a select few phones have anything higher than this number of cores. The speed at 1.2GHz isn't bad, but is a long way from the 2.3 GHz offered by the latest expensive phones.

Other stats aren't quite as impressive as the processor but are still great for the price range. At 1GB the RAM offered in the phone is as much as you can expect from a budget device, and only half what is available currently in the latest generation of top end smartphones. The 4GB of internal storage is low, but not for a budget smartphone. If you need any more than the 2GB of space available on the device (the operating system takes up the other 2GB) then you can always purchase a cheap microSD card to add up to another 32GB of space for apps, photos and music.

These stats won't mean much to those who aren't technology geeks, but in practice they mean that the device is pretty speedy for its price range and you'll be able to do multitasking without any problems. There should be no problem running most apps, although some of the latest games might run a little slow. The phone performs better than anything else in its price range currently on the market.

The phone doesn't come with a 4G LTE chip, but most people purchasing a budget smartphone will have little need for this expensive form of data. The HSPA+ 3G chip can still produce very good download speeds that are capable of allowing you to watch live video streams or video chat your friends. As a leading mobile phone site explains, a good HSPA+ connection can offer speeds high enough that going with a 4G network offers no benefit. There's naturally also WiFi and Bluetooth included.

The camera is very good for the price range. Although the 5 megapixels doesn't match up to some of the higher numbers offered in more expensive phones, the quality of the images taken are good for the price and you've even got an LED flash for taking photos in the dark. Unlike many other budget phones there's also a forward facing camera for the increasingly important video calling use.

A phone's display is one of the key factors influencing everyone's purchasing decision. No one wants to be staring at a phone whose resolution or viewing angles give them eye strain. Luckily ZTE have put some thought into how to get the best display without increasing the price and have managed to get some impressive technologies into this such as in plane switching, giving the phone wide viewing angles. The 4 inch screen uses LCD, and has a resolution that gives a perfectly respectable pixels per inch of 233. Overall the screen feels much better than you'd expect from a phone of this price point.

This is a great low cost phone and one we'd strongly recommend to the budget conscious and those buying their first smartphone.