A Window Cleaning Robot to the Rescue

Robotic window cleaners which have been with us only a few years have been designed to take over an unpleasant chore we would most willingly escape.Winbot Series window cleaning robot manufactured byEcovacRobotics, the company which had created the first ever prototypefor a robotic home cleaner in 2000, was released by them this spring. Winbot7is touted to be the world’s first robot which will automatically clean any glass surface (even thermopanes) that you place it on, regardless of its thickness.


Most early models of window cleaning robots consisted of cumbersome two-part units that fitted on both sides of the window pane, but Winbot7 which is the company’s second generation robot of this sort, is a single AC-powered machinewhich doesn't require a magnetic support on the other side of the glass... 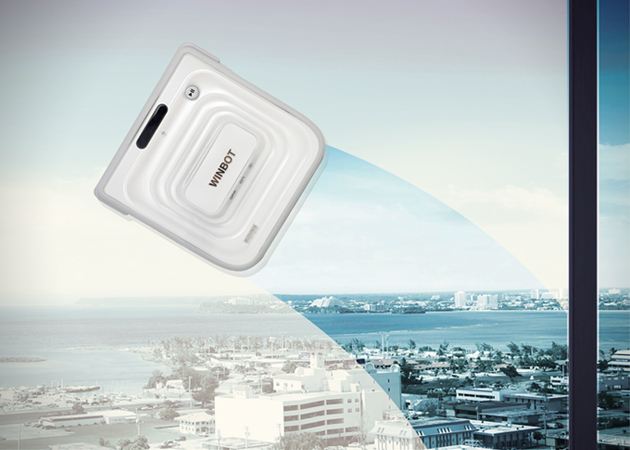 What are its main features? How does it function?
The robot works on the principle of suction. It attaches itself to your window panes via an industrial-strength suction mechanism. Itsinternal vacuum pump and seals generate enough suction to the window to support and allow the unit to manoeuver easily. Winbot is equipped with dual suction rings. If the outer ring senses any loss of suction, a signal will be sent to the bot’s “brain” to reverse direction and select a new path.

After the robot sticks itself to the window, it then automatically proceeds to determine its size and programs the best pathway for cleaning quickly and efficiently. This it does by moving from the bottom of the window to the top and then cleaning it with a zig-zag motion, coming back to where it began.
The robot sports a three-stage cleaning process which is designed for maximum efficiency. First the front cleaning pad sprayed with the cleaning solution provided, moistens, loosens and absorbs the dirt. Second, the squeegee draws the residual dirty water off the window pane. Lastly, the rear cleaning pad wipes the pane till it becomes spotless. The cleaning pads are made ofspecially-designed fiber which aids powerful absorption of dust and dirt. They are also easy to remove, wash and dry.
Power is supplied to the robot by a tethered cable that also serves as a last-resort lifeline should the bot lose power and suction, but a three-hour backup battery is included that will keep the suction motor running until it can be rescued.The Winbot comes with a remote control with batteries, a power adapter, a power cord with extension, two sets of cleaning pads, and spray-on cleaning solution.
It is also provided with a safety pod as an extra layer of protection and further comes equipped with anti-slip driving treads and two powerful motors. It definitely has what it takes to clean without slipping.And if the Winbot encounters a problem it sounds an alarm.
The body of the robot is surrounded by extremely soft material that will not scratch your window frame; the material on its underside is also engineered to not scratch. Its bumper and side rollers are designed to protect the unit and the window and to reduce friction.
According to the manufacturer, the robot hasa working noise output of just 55 decibels and will, therefore,not pose any disturbance.

How well does the Winbot clean?
Demonstrationsof the working of the robot which was conducted at the Consumer Electronics Show in January this year and subsequent reviews on its working, to some extent, support the claims the company makes regarding its efficiency.
The Winbot can indeed clean both the inside and outside of windows of any size or thickness. The robot can also clean showers, mirrors, sliding glass doors, and thermopane windows and proves particularly helpful in cleaning large window surfaces that are hard to reach and which would take much time and effort to wash by hand.Because it has a remote control even when the cleaning is not perfect, remaining dirt streaks can be recleaned.
The robot is not of much use when cleaning very dirty windows. The manufacturers advise a rough pre-cleaning in such cases and use of the robot once the windows are dry, as the cleaning pads are small and can remove only as much as they can handle.

Is it value for money?
The Winbot isn’t like a robotic vacuum cleaner where you set it and forget it. Sofor ordinary interior window washing it’s not as practical. But it is certainly a boon when you consider it as an alternative to climbing ladders carrying a bucket and a sponge! It may well be worth the $300 you pay for the Winbot 710 which is for framed windows and the $400 for the Winbot 730 which can be used on both framed and unframed windows.

Conclusion
It has been predicted that the rise of the home robot will be the next disruptive technology, consigning the human maid, and even the hand-pushed vacuum cleaner to history. This robotic window cleaner definitely has the potential to convert a tiring chore into a fairly painless process.

Author Bio:
Michael has a natural flair for interior and exterior home décor. He believes home improvements should not only be aesthetic but sensible and energy-efficient as well.  Michael is a freelance writer who has had 12 years of experience as an interior designer. He currently writes for Atlanta Champion Window and other home improvement companies.