Will All Students Soon Be Wearing ID Badges With Tracking Chips?

Tuesday, July 30, 2013
Student safety is an issue that has always been a top priority for schools. In the aftermath of recent school shootings, many schools are taking major steps to keep their students safe, but one San Antonio-based school district is doing something never before seen. Two schools in Northside ISD are currently testing out a pilot program that requires students to wear ID badges that contain tracking chips.

A statement released by Northside ISD officials read, “Northside ISD [is] harnessing the power of radio frequency identification technology (RFID) to make schools safer, know where our students are while at school, increase revenues, and provide a general purpose ‘smart’ ID card.”

Under the new program, students must wear the ID badges containing a tracking chip at all times when attending school. Worn like a necklace, the badges contain a Radio Frequency Identification (RFID) chip that is linked to the student’s social security number. This allows the school to determine if the student belongs on campus and gives them the ability to track the student’s location if they go missing or there’s an emergency.

The school district’s statement continued, “This ‘smart’ ID card will transmit location information of students to electronic readers which are installed throughout the campus. This is so that we always know where the students are in the building. After all, parents, you expect school staff to always know where your children are during the school day.” 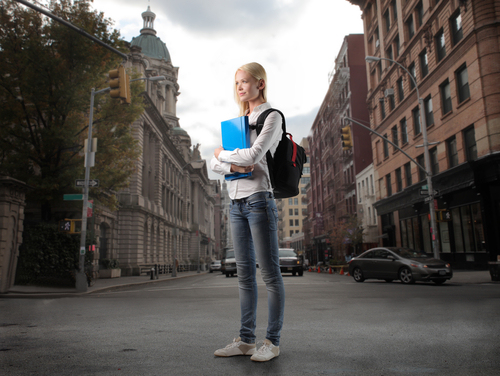 Some Protest Smart ID Badges As Invasion Of Privacy

While the majority of parents and students seem to support the school’s new student ID badges with RFID tracking chips, not everyone approves of this new initiative. John Jay High School sophomore Andrea Hernandez was actually expelled from her school after refusing to wear the new ID badges. The student continually stood her ground, refusing to wear the badge prompting the school’s administration offered a deal – she could wear an ID badge that had the chip removed, making her location untraceable. However, the ID badge still would have a barcode that served as an identifier.

Hernandez declined this offer on the grounds that it would make it look as if she was complying with the program that she didn’t approve of. Hernandez believes the new ID badges are a violation of her religious beliefs –her father claimed it was the “mark of the beast” – and an invasion of her privacy.

After Hernandez spoke out against the new “Smart” ID badges, other students and parents have joined the cause. In fact, some parents are taking their kids out of another pilot school using the technology – Anson Jones Middle School –because they don’t want to be a part of it.

The Hernandez family sued Northside ISD on the grounds that the new Smart ID badges violated the student’s First Amendment religious freedom and free speect rights, due process and equal protection rights, and her rights under the Texas Religious Freedom Act. The family sought an injuction that would bar the enforcement of the new ID badge requirement.

The case went before a San Antonio district court judge who denied the injunction. The court found that the new ID badge requirement did not infringe on the student’s rights.

The court’s statement said, “The District has a legitimate need to easily identify its students for purposes of safety, security, attendance and funding, and the requirement that all students carry a Smart ID badge is certainly a rational means to meet such needs… uniformity of badges is important because campus administrators and others can determine, at a quick glance, that the person wearing the badge belongs on the campus.”

In short, the court believed that the safety and security of the students and educators justified the ID badge requirement.

Is This The Future Of Student ID Badges?

In the past, student ID cards were more of a formality. In schools in which the ID badges were issued, they often served little purpose, unless you count getting children discounted student rates at the movie theater as an important purpose. But with so much concern being placed on student safety in this new environment we live in, could Smart ID badges become the standard at schools across the nation?

Only time will tell, but it seems to be a safe bet that more school districts will test out their own Smart ID badge programs in the coming years. It’s also a safe bet that some students and parents will protest these programs, citing privacy issues and arguing that one shouldn’t be forced to give up his or her rights as a tradeoff for enhanced security. Some may even question whether or not the ID badges actually increase student safety or if they simply give educators more power over children.

Rest assured, you haven’t seen the last of student ID badges with tracking chips in them.