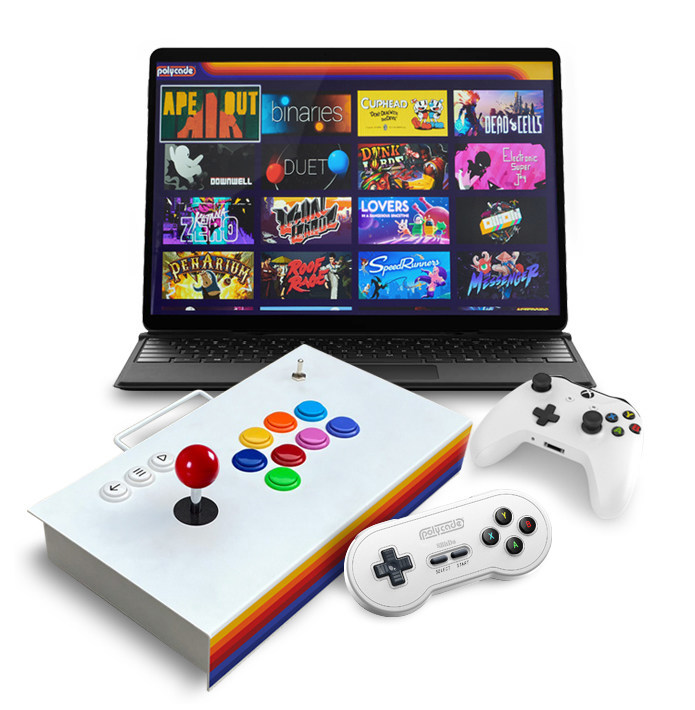 Polycade AGS provides players with an easy and powerful way to organize and launch games they own from multiple platforms such as Steam, GOG, and Utomik, creating one unified library that can be played with Polycade game controllers or typical arcade controls. Additionally, for the seasoned gamer, Polycade AGS includes popular emulators baked-in and pre-configured, to make running retro ROMs easier than ever. Also included are leaderboards for nearly any retro arcade game, an achievements system that awards players with real cloth patches similar to what Activision did in the 80's, and a unique game rating system to help make it even easier to find the right games for the right player, and the right game for the right moment.

"Nearly everyone likes video games, but not everyone's a gamer," said Tyler Bushnell, co-founder and CEO of Polycade. "The higher the learning curve and commitment a game requires, more people will opt out. Everyone enjoys a game that's easy to learn, but difficult to master. We designed Polycade AGS to be super easy for the low-commitment players, yet with a lot of customizability and extensibility for the midcore and power users."

Also included in Polycade AGS is a game store that allows players to purchase legally licensed retro games and well-curated modern titles with a focus on social, in-person play. Polycade AGS will have over 100 games to choose from at launch.

For those that want a console-style experience in the living room, Polycade 2600 is a plug and play PC preloaded with Polycade AGS. The clean-lined powder coated steel case is designed with modern aesthetics in mind. Polycade 2600 includes two Polycade eZpZ Controllers, a 240GB SSD with option to upgrade to 1TB.

Due to Polycade's launch success with its first crowdfunding campaign (raising over $125k for a $25k ask), and in order to engage new and old Polycade fans, Polycade is conducting a second crowdfunding campaign on IndieGoGo. Backers will receive early access to the Polycade software at the end of the campaign, and will also get a number of exclusive perks. Polycade consoles and controllers will ship within six months.