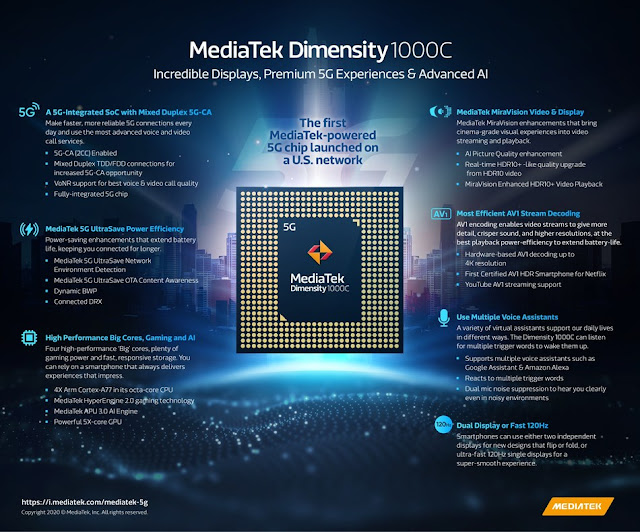 "From the world's first standalone 5G data call to collaborating on their first 5G chipset in America, T-Mobile and MediaTek have partnered to move 5G innovation forward," said Ryan Sullivan, VP of Product Development at T-Mobile. "This is another step towards #5GforAll on America's largest nationwide 5G network."

"Compared to other parts of the world, consumers in the U.S. haven't had much choice on the chipset side when it comes to 5G smartphones," said Dr. Yenchi Lee, Deputy General Manager of MediaTek's Wireless Communications Business Unit. "MediaTek is focused on giving consumers more options and expanding access to 5G devices so that everyone can enjoy the premium features and speeds that are defining the next era of mobile computing."

MediaTek Dimensity 1000 powered devices have already launched with key smartphone brands in other markets. The Dimenstiy 1000C was developed and tailored for the US market. The 1000 series joins MediaTek's other popular Dimensity 5G chips including the Dimensity 800 and Dimensity 700 series. MediaTek offers a full range of 5G chips to bring the promise of 5G to everyone.

MediaTek 5G technologies are integrated across product lines – including in smartphones and 5G connectivity for routers and PCs.