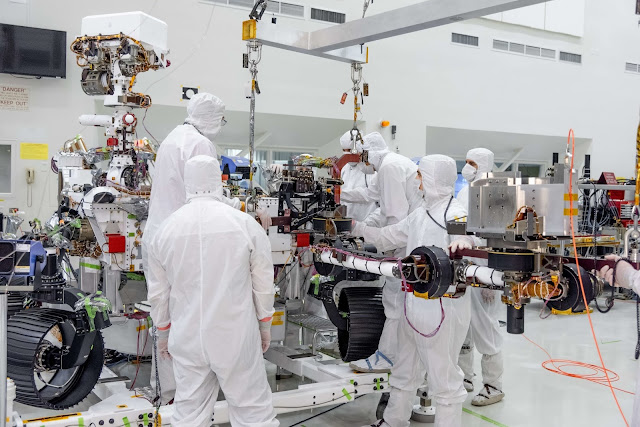 The Mars 2020 Perseverance rover, set to launch as soon as this week, will be carrying a robotic arm and other technology designed and built by Motiv Space Systems. The Perseverance rover is an iconic and innovative piece of hardware that will advance the search for life on Mars and study its surface in greater detail. Perseverance will be the first rover to collect samples from Mars that will ultimately be sent back to earth. It will also be the first to provide advanced stereoscopic, high definition video using new zoom-capable cameras.

Motiv Space Systems was honored and excited to partner with NASA and NASA's Jet Propulsion Laboratory (JPL) to design and build the robotic arm. Motiv also had the pleasure of partnering with Malin Space Science Systems on the development of several camera elements. Both components will be key to the success of this mission.

The robotic arm built by Motiv is the most sophisticated robotic arm that NASA has ever sent to Mars. The project required that Motiv increase the scientific payload the arm can carry by 50%, increase the precision, and expand the capabilities of the robotic arm over the previous rover, Curiosity – all with almost no increase in the arm's mass.

The primary functions of the 2-meter long robotic arm are to position instruments on the Martian surface and support a drill that will core rock samples. A Mars sample return mission is being planned to bring those samples to earth – turning the rover into the first Martian robotic rock collector. Previous rovers, like Curiosity, ground rock samples into dust for evaluation, while Perseverance's robotic arm will allow the drill to collect whole cores.

Past rovers had to conduct all their research on Mars, limited to instruments that were light enough to be delivered to Mars and could survive Mars' harsh environment. Bringing samples back to earth will allow scientists to research the surface of Mars in ways they never have before, much like how samples collected during the Apollo missions are still revealing new scientific details today.

The robotic arm's force-torque sensor – also developed by Motiv – makes the drilling and collection of the rock samples possible. Without it, the robotic arm might not use the right force while drilling or storing the sample.

Motiv CEO Chris Thayer likens the force-torque sensor to the nerves in your arm. "The force-torque sensor tells the rover how much force is being applied while it's drilling a core sample from a rock. For example, this is similar to how our nerves would sense and provide feedback if we were using a drill in our own hands to do the same job."

In addition to the robotic arm, Motiv developed the optomechanical system for the first optical zoom camera to land on Mars, an investigation led by Dr. James Bell at Arizona State University. Previous missions had attempted to develop an optical zoom but were unsuccessful. Motiv was able to use the lessons learned from past missions and their experience in complex space mechanism design to finally crack the code.

This highly sophisticated camera will be able to send high-definition stereo images, up to and including video, back to us on earth. Not only will these images and videos help scientists with their research, but they will give us a thrilling and intimate look at the planet we hope to travel to next.

"Our entire team is honored to contribute to the Perseverance rover," said Thayer. "We can't wait to see the scientific advancements that come from its important mission."