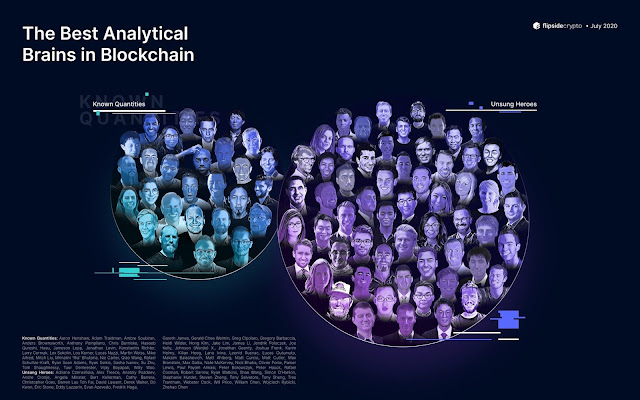 The release highlights the importance of data science and analytics unlocking the value of blockchain technology across two categories: 30 individuals were recognized as "Known Quantities" who are well known in the industry. BABB "Known Quantity" recipients include Aaron Henshaw from Bison Trails, Ambre Soubiran from Kaiko, Larry Cermak from TheBlock, and Mrinalini "Ria" Bhutoria from Fidelity Digital Assets.

"Unsung Heroes" is the category of individuals who are working behind the scenes, manipulating, analyzing and communicating data. They are often data scientists or engineers who are less publicly visible, but are instrumental in the industry's growth. 63 Individuals are being recognized as BABB "Unsung Heroes", including Fredrik Haga from Dune Analytics, Gareth James from Radar, Heidi Wilder from Elliptic, James Li from CryptoCompare, Shae Wang from Ripple, Webster Cook from Chainalysis and Flipside Crypto's own Angela Minster.

"It's not just the visionary business executives (although they certainly do their part). It's those who play a much more instrumental role in creating something out of nothing: the data scientists, the data engineers and the technical analysts," noted Dave Balter, CEO of Flipside Crypto. "Their praises are rarely sung and they should be, especially during a time when every major media outlet, from the BBC to NBC, picks up on the impact of cryptocurrency to our global economy."

"I firmly believe that the public blockchain industry, by virtue of its youth and dynamism, is one of the most accessible and meritocratic industries on the planet. It eagerly accepts new talent regardless of provenance, formal training, or professional background. Every month it seems that I encounter the work of a new analyst possessing a depth of understanding that outstrips that of the sell side on Wall Street when they turn their attention to the sector. Lists like these give well-deserved recognition to some of the less high-profile analysts in the industry, many of whom I rely on for insight." Commented Nic Carter, Cofounder of Coin Metrics.

CEO of Messari, Ryan Selkis, commented, "Flipside's Best Analytical Brains in Blockchain 2020 report highlights some amazing (and often unsung) talent. I consider myself to be pretty plugged in to the industry's top researchers, but even I discovered a treasure trove of high-signal new follows from Flipside's analysis. Individuals who are rarely seen or publicly acknowledged, but have been making tremendous contributions to the industry. I'm excited to help promote these thinkers and highlight their accomplishments as we work towards building the future of finance."