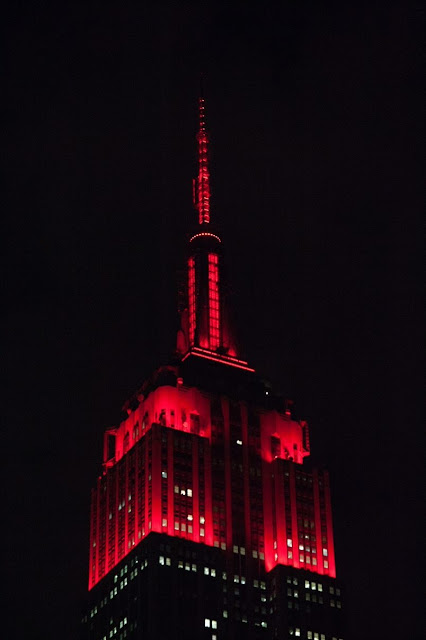 As of April 2, and every night throughout the ongoing pandemic, the Empire State Building will shine in a dynamic heartbeat to show solidarity and support to the over 1 million people in 180 countries affected by COVID-19. At this time, over 208,000 people have fully recovered in the three months since the virus appeared.

Additionally, at the top of every hour, the Building will sparkle in the colors of First Responders to pay respect to the heroic emergency workers on the front line of the fight. The colors include yellow, blue, silver, red, white, green, and grey for the dispatchers, law enforcement, correctional officers, firefighters, paramedics, and military members of our communities who have put their lives on the line on behalf of us all.

The Empire State Building's world-famous tower lights, in partnership with iHeartMedia's Z100, will continue to sync to a broadcast of Alicia Keys' Empire State of Mind every night at 9:00 pm. The public is invited to join the conversation by posting a video to their social media pages with the hashtag #EmpireStateBuilding and #iHeartNewYork and tagging both the Empire State Building and iHeartRadio to share how we are all still able to connect with each other.

At the close of the 9:00 p.m. light show, the Empire State Building will go dark for five minutes to honor the memory of those who have lost their lives in the global pandemic and those who grieve for them.