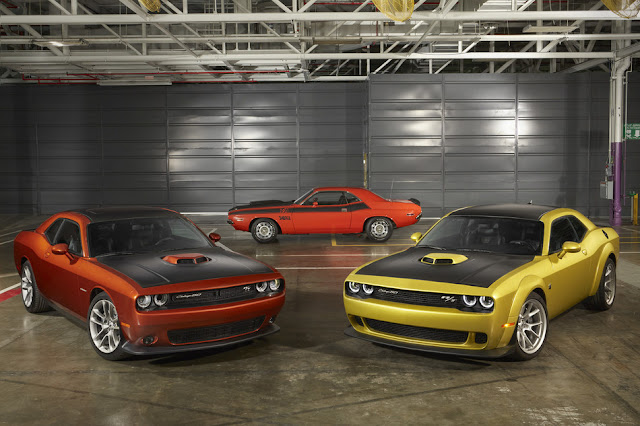 The "golden age" of muscle cars is now and Dodge is celebrating the golden anniversary of its iconic Challenger with the new limited-production 50th Anniversary Edition, shown for the first time today at 2019 AutoMobility LA.

When the Dodge Challenger first entered in the muscle car ranks of Detroit's Big Three 50 years ago, it arrived with something its competitors didn't have: the greatest range of powertrain choices in the industry, from the small but durable 225-cubic-inch "Slant Six" to the fearsome "Elephant Motor" — the 426 HEMI®.

"2020 marks the 50th Anniversary of the Dodge Challenger, one of the most storied muscle cars in history," said Tim Kuniskis, Global Head of Alfa Romeo and Head of Passenger Cars – Dodge, SRT, Chrysler and FIAT, FCA – North America. "That history was built on a few key things: big attitude and big muscle, loud colors and loud exhausts, and an enthusiast community that is as unique and diverse as our special editions. So, to commemorate the 50th, we're celebrating with a cool new special edition that checks all of these boxes."

Blast With A Past: New 2020 Dodge Challenger 50th Anniversary Edition Shakes Things Up
With its heritage design, unmatched power and everyday livability, the Challenger is a true GT car and every bit as beloved and relevant to today's consumer as the first generation was 50 years ago.

To celebrate Challenger's colorful history, the Dodge Challenger 50th Anniversary Edition sticks to its roots, focusing on the details big and small, that have made Challenger what it is today: high-impact paint (HIP) exterior colors, Shaker hood scoop, hot wheels and custom touches on the inside — all designed to give Dodge enthusiasts another way to display legendary Dodge performance attitude.

As the name suggests, the legendary cold-air grabbing Shaker extends from the engine compartment, directing cooler air back into the 5.7-liter or 392 HEMI V-8 engine. Like the original 1970 Challenger R/T with the Shaker hood, the 50th Anniversary Edition continues the Dodge tradition of an engine-mounted hood scoop that "shakes" with the movement of the powertrain.

The functional Shaker hood comes with a Mopar cold-air intake, conical air filter and optimized air box for improved airflow and performance. Lift the hood and enthusiasts will also be treated to a "SHAKER" underhood decal — reminiscent of the original 1970 Challenger.

Each 50th Anniversary Edition will have a custom look, straight from the factory with a standard Satin Black hand-painted hood and black-wrapped roof and decklid. Challenger 50th Anniversary logo badges appear on the grille and spoiler in new "Gold School" finish. Fender badges are also finished in "Gold School." The standard Satin Black fuel-filler door with heritage "FUEL" lettering adds a touch of nostalgia.


70 x 7 x 4
Commemorating the original model year of the Challenger, 1970, there will be 70 numbered units of the following four models in each HIP color:

The passenger-side IP badge displays the Challenger 50th Anniversary logo and is color-matched to the exterior; each vehicle is identified as "x out of 70."

Offering the most muscle for the dollar with a starting price of less than $40,000, the Challenger R/T Scat Pack is powered by the naturally aspirated 392 HEMI V-8, delivering 485 horsepower and 475 lb.-ft. of torque. The Challenger R/T Scat Pack comes standard with the Tremec six-speed manual transmission, while the TorqueFlite eight-speed automatic transmission is available.