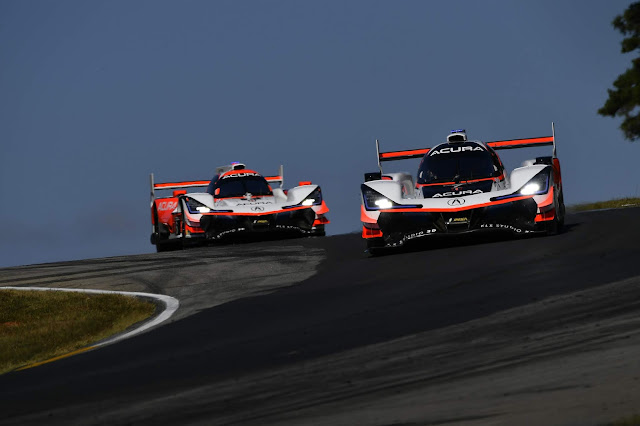 Meanwhile, in the GTD division, Meyer Shank Racing claimed the Drivers' and Teams' Championships with the Acura NSX GT-3 Evo.

For a video link highlighting Acura's 2019 championship-winning season in IMSA sports car competition, go to: https://www.youtube.com/watch?v=e4rGLh28BJM&feature=youtu.be or download the video at: https://app.box.com/s/k3k0h8tooy2zmzcpdup6k7xynsssnkt7

Finishing a season highlighted by race wins at Mid-Ohio, Detroit and Watkins Glen, and podium finishes in nine of the 10 races in 2019, Acura officially secured the Manufacturers' Championship at the start of today's season finale. But the fight for the drivers' and teams' titles went down to the final laps of the 10-hour endurance contest.

With the #31 Cadillac of Felipe Nasr, Pipo Derani and Eric Curran claiming the win, the #6 Acura ARX-05 of Dane Cameron, Juan Pablo Montoya and Simon Pagenaud needed to finish eighth or higher for full-season drivers Cameron and Montoya to take the championships for themselves and Acura Team Penske.

With Montoya running sixth following the final round of pit stops, a caution flag with just under 30 minutes remaining bunched the field together for a sprint to the finish. Closing drivers Montoya and Ricky Taylor in the #7 Acura gained positions in the final laps, with Taylor claiming third at the checkers in the car he shared with Helio Castroneves and Graham Rahal. Montoya followed his teammate home in fourth to claim his first IMSA championship, a second prototype title for co-driver Cameron, and the Teams crown for Acura Team Penske.

Following a season that included one win and four second-place finishes in 10 races, teammates Mario Farnbacher and Trent Hindman claimed the GTD drivers' title at the start of today's race, with their Meyer Shank Racing team claiming the Teams Championship at the same time.

The #86 Acura NSX GT3 Evo ran as high as fourth with starting driver Justin Marks, who joined Farnbacher and Hindman for the long-distance races this year. However, debris punctured the radiator as the race approached the five-hour mark, and the resulting coolant leak and overheating led to the car's retirement.

Teammates Katherine Legge, Christina Nielsen and Bia Figueiredo kept their Heinricher/MSR Acura NSX GT3 Evo in contention throughout the race. Running a triple stint to close out the race, Legge was in a three-way battle for fifth place in the final laps, until a passing prototype forced her Acura off the racing line, dropping the #57 Caterpillar Acura to a seventh-place finish.

Saturday's race concluded the 2019 IMSA WeatherTech SportsCar Championship. Acura will return to defend its prototype and GTD titles in the 2020 season, which opens January 25 with the Rolex 24 at the famed Daytona International Speedway.

Dane Cameron (#6 Acura Team Penske ARX-05) wins 2019 DPi Drivers' Championship with co-driver Juan Pablo Montoya; Acura wins the DPi Manufacturers' Championship and Acura Team Penske claims the DPi Teams' Championship: "It's a tremendous day. It was a little too close for comfort there in the last couple of hours, but we did exactly what we needed to do. We didn't have a ton of pace [in the race] for the first time all year, but we had a plan and executed perfectly. Congratulations to everyone at Acura and HPD for their support and making this night possible."

Juan Pablo Montoya (#6 Acura Team Penske ARX-05) wins 2019 DPi Drivers' Championship with co-driver Dane Cameron: "I've been lucky, I won a couple of Indianapolis 500s, Formula One races, NASCAR races, I can't complain. I came into this program at the start last year and to win the championship for Acura and Acura Team Penske is amazing. Everyone in the program did an amazing job all season long. The support from Acura has been incredible. Hopefully, we can grow on it into the future."

Trent Hindman (#86 Meyer Shank Racing Acura NSX GT3 Evo) won GTD Drivers' Championship with co-driver Mario Farnbacher, Meyer Shank Racing also claims the GTD Teams' Championship: "It's a little bit bittersweet [dropping out of the race]. I mean, we had a really excellent car all weekend long, as we have all season. So, it's a shame we couldn't capitalize on that [in the race today] and help our teammates secure the Manufacturers' Championship. But it's also very sweet. We got the drivers' and teams' championships wrapped up, and that's just an incredible feeling. Thank you to everyone at Acura, HPD, Auto Nation, Sirius/XM, all the Meyer Shank Racing guys, my co-drivers Mario and Justin, and most important, Mike [Shank] for opening up this opportunity for me."

Mario Farnbacher (#86 Meyer Shank Racing Acura NSX GT3 Evo) won GTD Drivers' Championship with co-driver Trent Hindman: "It's definitely a really cool feeling [to win the championship] and I am so proud of this team. It's pretty cool that I had my first race in America at Road Atlanta and now to win the championship here is pretty special. The trust that Michael Shank, HPD and Acura have put in me is an amazing feeling. Mike always wants 100 percent out of us every time we race, and to be able to do that for him and give him this championship is such an accomplishment. I couldn't have asked for better teammates this year and I will remember this championship forever."


Jon Ikeda (Vice President and Acura Brand Officer): on Acura's 2019 IMSA championship-winning season: "We started this motorsports journey in 2017. To be here and winning championships after just three years is just incredible. I can't say enough about Mike Shank and his Meyer Shank team, who have been with us from the start. Roger Penske and his team are the gold standard of the industry. We partnered with winners, and we've gotten great support from everyone at HPD with their tireless efforts. Acura is a performance brand. We're here to win races and compete for championships. And we're not done yet."