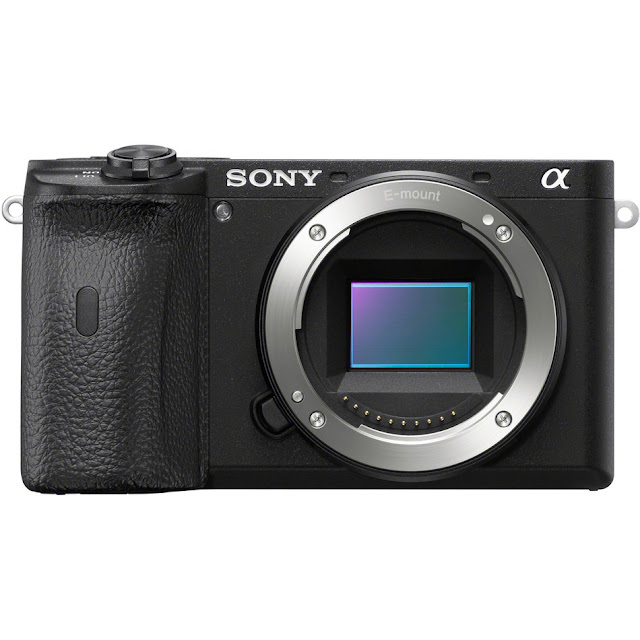 B&H Photo would like to share the announcement of the Sony a6600 and Sony a6100 APS-C format digital interchangeable lens mirrorless cameras and a pair of compatible APS-C format lenses—the all-around E 16-55mm f/2.8 G Lens and a super telephoto E 70-350mm f/4.5-6.3 G OSS Lens.

The new Sony a6600 will serve as the flagship of Sony's APS-C mirrorless line with sparkling autofocus, an updated 16-bit 24.2MP Exmor APS-C CMOS sensor, and a 1.8x jump in processing power with the latest BIONZ X processor and front-end LSI. Able to lock on in just 0.02 seconds and offering the latest Real-time Tracking AF options, Sony claims this is the fastest focusing mirrorless camera today. The system includes similar features to those found in the a6400 and a7R IV, including Real-time Tracking AF, Real-time Eye AF for both humans and animals, and support for all these continuous focus modes during movie shooting. A Fast Hybrid AF System that uses 425 phase- and 425-contrast-detect points covering 84% of the image area to track fast-moving subjects.

The new Sony a6100 is an entry-level major improvement to the venerable a6000, which will remain in the lineup for the foreseeable future. The a6100 strips the in-body stabilization, advanced video profiles such as S-Log2/3 and HLG, and Eye AF during movie recording of the a6400 and a6600 while shedding some ounces in a lightweight plastic body. However, the camera does use a revamped 24.2MP Exmor APS-C CMOS sensor and BIONZ X processor to deliver detailed imagery. Autofocus is still spectacular on this model with the same 425-point system and lightning fast 0.02 second lock-on times as its related cameras. UHD 4K recording is possible as well, a serious upgrade if you are an a6000 shooter. And Real-time Tracking for movies is available for more easily capturing moving subjects.

The new E 16-55mm f/2.8 G Lens, is a compact, fast zoom lens with a 24-82.5mm equivalent focal length. This mid-range zoom is ideal because of its versatility of being able to quickly go from wide-angle to short telephoto. The 1.09lb lens is equipped with two Advanced Aspherical elements, two aspherical elements, and three extra-low dispersion elements for minimizing aberrations and improving contrast and clarity and an XD Linear Motor for fast autofocus.

The E 70-350mm f/4.5-6.3 G OSS Lens reaches an equivalent 105-525mm range, for sports, wildlife, and tons of other applications. It is also a good match for the 16-55mm as an extremely versatile pair of lightweight zooms. This telephoto lens, even with its range, weighs just 1.38 lb, and incorporates one aspherical element and three extra-low dispersion elements to reduce distortion and aberrations and the aforementioned XD Linear Motor plus Optical SteadyShot Stabilization.

Last on the list of releases, Sony has released new firmware for their full frame flagship a9 camera.