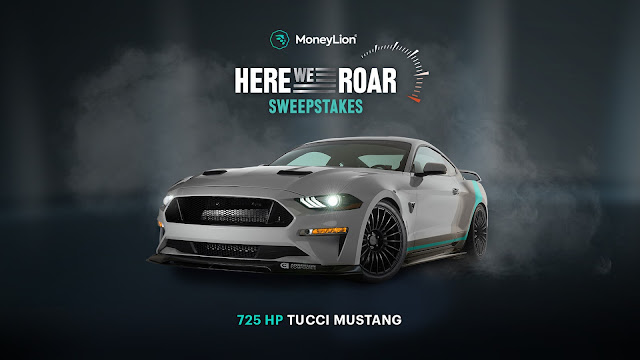 MoneyLion, the mobile bank that created America's most powerful financial membership, and Ford Performance unveiled the latest of three custom-built 2019 Ford Mustang GTs as part of the MoneyLion HERE WE ROAR Sweepstakes.

"Racing is in my blood because it's been a part of my family for generations, starting with my grandfather and racing team owner, Jim Trueman," said Austin Cindric. "Upon meeting the father and son duo, Dave and Dom Tucci of Tucci Hot Rods, I was immediately drawn to their own family legacy in performance cars and overwhelmed by their passion and purpose for their work. And there's not a more humbling and historic legacy in racing and high-performance cars than the Ford Mustang, the iconic car we had the privilege of enhancing and reimaging for one lucky fan to win."


The MoneyLion HERE WE ROAR Sweepstakes, which launched in April and featured the first custom-built and 700-horsepower Ford Mustang GT, designed and built by Vaughn Gittin, Jr. and Joey Logano, gives motorsports fans a once-in-a-lifetime opportunity to own one of three custom-built 2019 Ford Mustang GTs.

Now through October 20, 2019, fans can register for a chance to win one of the custom-built 2019 Ford Mustang GTs in the HERE WE ROAR Sweepstakes by visiting the Sweepstakes entry page or by sending a text message with the word "ROAR" to 95615 to receive a link to the website. Three winners will be flown with a guest to Ford Championship Weekend at Homestead-Miami Speedway, November 15-17, 2019, to receive their car. Upon completion of a sweepstakes entry, entrants can earn additional entries by joining MoneyLion's free zero-fee checking account. See website for complete official rules and eligibility.

"This new, custom-built and 725-horsepower 2019 Ford Mustang we designed with Austin is an inspired throwback to Austin's grandfather's race car of the early 1980s," said Dom Tucci. "We used the retro racing stripes featured on his grandfather's IMSA sports car and seamlessly updated them to have a more modern look and feel. We also included other small but memorable elements, including a visual representation of his grandfather's racing gloves on the shift boot and a one-of-a-kind 'Legacy' emblem designed to celebrate the Cindric, Tucci and Ford families."

MoneyLion created the HERE WE ROAR Mustang build-off video series so fans can see how the cars are built from scratch by the Team Penske drivers and the world-class performance car influencers with whom they partnered. The series consists of several original episodes documenting each build in its entirety and takes fans inside the garages where the cars were custom-built and behind the scenes at the NASCAR races where they will be unveiled.


For more information, visit www.moneylion.com or download the app.