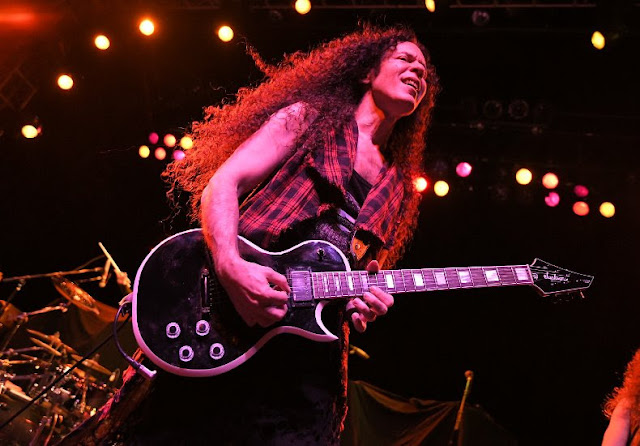 IK Multimedia is proud to welcome GRAMMY® Award-nominated recording artist Marty Friedman to its family of artists. The platinum-selling guitarist is the newest member of a growing roster of artists who have been incorporating a variety of hardware and software tools from IK Multimedia into their studio and live rigs.

Now back in the studio after his U.S. Winter 2019 tour in support of his album One Bad M.F. Live, Friedman has recently been exploring the combination of IK's AXE I/O premium audio interface for recording and re-amplification, and IK's acclaimed AmpliTube amp and effects modelling software. He notes, "Between AmpliTube and the AXE I/O, I get unlimited combinations of real amp sounds; even at home. It's re-amping gone mad. And for someone like me who doesn't like to spend a lot of time turning knobs to get great tone, it's perfect."

Friedman was best known for his performances as a member of the iconic heavy-metal band Megadeth, and as a member of the band Cacophony, before breaking out on his own as a solo artist. During his career, he's earned 27 gold and platinum records, headlined the famed "Rock in Rio" fest in Brazil, appeared on countless TV performances, and played sold-out stadium tours in Europe. He currently tours and makes appearances across his second home, Japan.

About AXE I/O and AmpliTube
AXE I/O is a new professional 2 in/5 out audio interface – and controller - designed specifically with the needs of the recording guitarist in mind, providing best-in-class sound quality and powerful features for making recordings faster, easier and better. The award-winning AmpliTube software and app for Mac/PC/iPhone/iPad/Android recreates the entire guitar/bass signal chain from instrument to recording device, in a hyper-realistic and intuitive way.

For more info about AmpliTube software and apps, visit: www.ikmultimedia.com/amplitube4