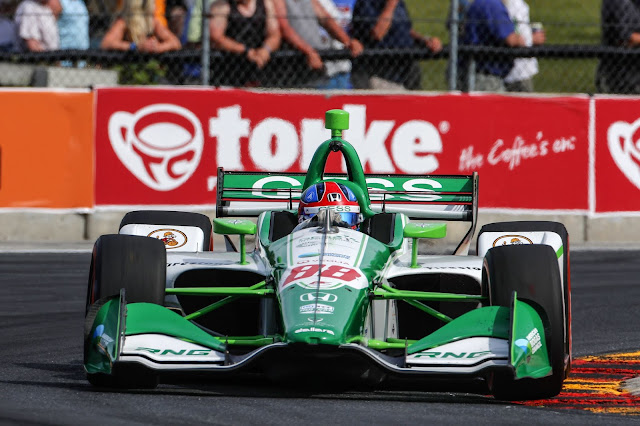 
Graham Rahal, the former holder of both youngest race and pole winner records prior to Herta, will start his Rahal Letterman Lanigan Honda from fifth, with teammate Takuma Sato alongside in sixth as Honda driver's claimed four of the top-six qualifying positions.

Although failing to advance to Fast Six final qualifying, Sebastien Bourdais will start his Dale Coyne Racing with Vasser-Sullivan Honda from seventh. James Hinchcliffe and Marco Andretti also advanced to the second qualifying round, and will start ninth and tenth, respectively. Although he advanced out of first-round qualifying, mechanical issues prevented defending series champion Scott Dixon from running in the second round, and he will start his Chip Ganassi Racing Honda from 12th.

Colton Herta (Harding Steinbrenner Racing Honda) Pole qualifier, first career IndyCar Series pole, youngest pole qualifier in Indy car history: "I'm so happy with how the day went. The #88 GESS Capstone Honda guys are all working so hard and so well together. The car was fast. This is the first time that we've had that edge in qualifying to go for pole, and I loved it. We really took advantage of it and got the best starting position for tomorrow. Now we'll keep checking the weather [the possibility of rain is in the local forecast] and make changes accordingly so we can have a great race!"

Alexander Rossi (Andretti Autosport Honda) Qualified second: "It came down to the [final lap], but that's the NTT IndyCar Series. It's what we have week in and week out, and requires perfection from both the team and the driver. It was a good day, I think in general for the #27 NAPA Andretti boys – and congratulations to [pole qualifier] Colton [Herta], he did a good job. It's unfortunate to miss out on the [championship] point [awarded to the pole winner] that we need. But that's the way it is. We're ahead of [main championship rival] Josef [Newgarden, on the starting grid] and we'll try to keep it that way."